Indian Arrows started with a 4-4-2 set-up with skipper Parthib Gogoi leading the attacking troops. TRAU, who had finished third last year, had a 4-3-3 formation with Krishnananda Singh and Joseph Olaleye in front line. 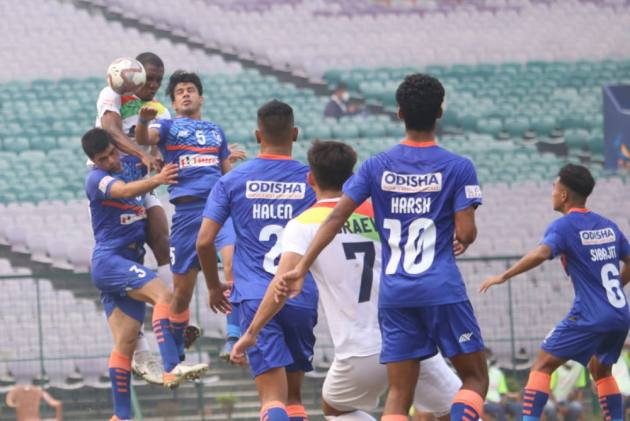 TRAU and Indian Arrows played out a goal-less draw in the opening match of the I-League at the Mohun Bagan ground in Kolkata on Sunday. (More Football News)

Despite both the teams getting plenty of shots on target, they shared points after the stalemate.

Indian Arrows started with a 4-4-2 set-up with skipper Parthib Gogoi leading the attacking troops. TRAU, who had finished third last year, had a 4-3-3 formation with Krishnananda Singh and Joseph Olaleye in front line.

In the sixth minute, Parthib Gogoi managed to get a shot from close distance, but TRAU goalkeeper Amrit Gope made a clean save.

The team from Imphal fell slightly behind Indian Arrows in terms of possession as the game settled down in first half. But the AIFF developmental side could not convert the possession into goal-scoring opportunities.

In the 20th minute, Mohammad Fayazuddin Shah’s run from the left created a moment of panic in Indian Arrows’ half. But Kishan Singh, who sprinted quickly to collect the cross from Fayazuddin, also hit the ball over the goal post.

In the 28th minute, TRAU had the best chance of the first half, as Naresh Singh sent a cross from the right but Akobir Turaev's header was deflected away by Sajad Hussain Parray on the goalline and Indian Arrows breathed a sigh of relief.

TRAU started the second half with high intensity. Indian Arrows goalkeeper Ahan made a brave save in the 59th minute after Turaev’s right-footed shot on the turn almost gave TRAU the lead.

Turaev continued to make threatening penetrations inside the box, but he was caught offside in the 77th minute, just when it looked like he might open the scoring.

In the 89th minute, Sajad Parray’s challenge on TRAU player earned him his second yellow card of the match, and he was sent off, leaving Indian Arrows one man short. But they defended well in the injury time and continued to keep the possession.

Harsh Patre suffered an injury and limped out of the ground with a minute to go in the match, leaving Arrows with nine men. But Indian Arrows fought valiantly till the final whistle and the match ended in a 0-0 draw.