With the win, Indian Arrows snapped a hat-trick of losses but remained at the bottom of the table with seven points from nine matches 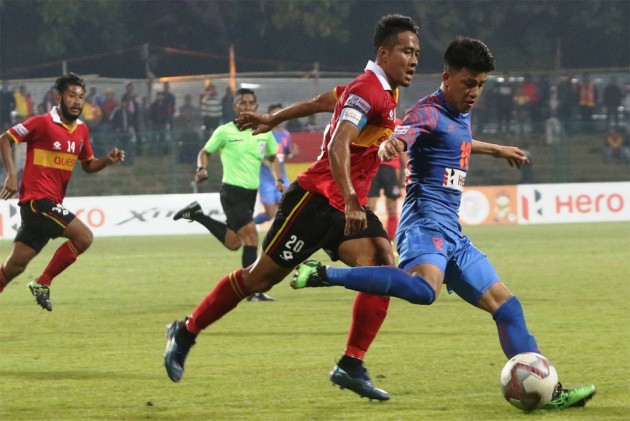 East Bengal's bid for an elusive I-League title got a further blow as they were stunned by AIFF's developmental outfit Indian Arrows 0-1 at Kalyani, West Bengal, on Saturday. (More Football News)

Vikram Pratap Singh struck the all-important goal against the run of play in the 58th minute to lead the Arrows to their second win from nine matches.

It was Givson Moirangthem who set up the goal with a square pass from the edge of the box as the home team's defence was in a total disarray.

With the win, the Arrows snapped a hat-trick of losses but remained at the bottom of the table with seven points from nine matches.

Going through a turbulent phase, East Bengal started the year with a hat-trick of losses, including a 1-2 derby debacle against arch-rivals Mohun Bagan, leading to the resignation of head coach Alejandaro Menendez.

But East Bengal had returned to winning ways with a 2-0 win over Chennai City in an away match in Coimbatore as they needed to continue the momentum with three back-to-back home matches.

Playing under their new coach Mario Rivera, who took charge on Saturday, there was no change in fortunes for East Bengal as they slumped to 11 points from nine matches, 12 behind arch-rivals Mohun Bagan who are sitting atop the standings after 10 matches.

East Bengal missed a flurry of chances and their easiest came in the 85th minute when Marti Crespi's long ranger rebounded and fell to substitute Ansumana Kromah.

The Liberian found himself unmarked but ended up messing it up in front of an open net with his shot going over the bar.

Worse was in store for East Bengal as they were reduced to 10 players in the stoppage time following a double yellow to their Spanish forward Marcos Jeminez Espada.

Crespi had earlier squandered a chance in the 16th minute from captain Lalrindika Ralte's freekick as the home side dominated the proceedings in the first-half but without any goal.

East Bengal next take on Aizawl FC and Punjab FC on February 7 and 13 respectively.