AIFF's developmental side, Indian Arrows, found themselves in the middle of a good run after they beat Aizawl FC 2-1 in their last game 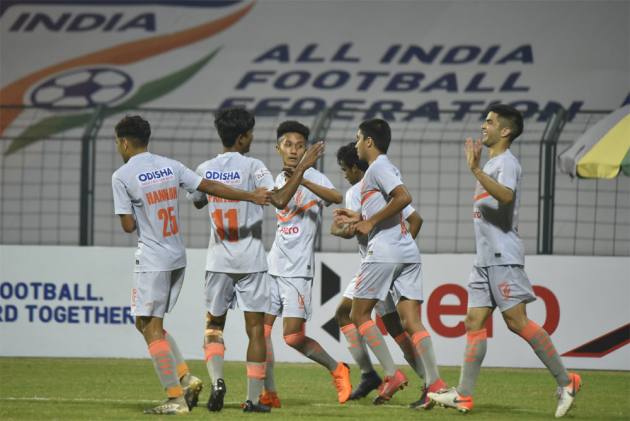 All India Football Federation's (AIFF) developmental side, Indian Arrows, will look to draw the curtains on their Hero I-League campaign on a high when they take on Sudeva Delhi in Kolkata on Saturday. (More Football News)

Goals from Kean Lewis, Mahesh Singh, and Shaiborlang Kharpan helped Chencho Dorji's side get the better of Indian Arrows back in match week 3.

However, the Indian Arrows, now finding themselves in a much better streak of results having won two of their last three games, will be looking for sweet revenge against the Delhi team.

And now, the Delhi-based club sits second in Group B with 15 points from 12 games, three points behind Aizawl FC.

Despite being exempt from relegation, Sudeva will be motivated to beat the Indian Arrows and extend their winning run to three games.

Speaking at the official pre-match press conference, Sudeva Delhi assistant coach Pushpender Kundu said, "The last win and three points have given more confidence and boost to the team for the upcoming games.

"The boys played extremely well in the last two games. They have followed all the instructions and executed the game plan for 90 minutes, and the results have followed.

"For me, Indian Arrows have been the most developed and improved side of this season. Match by match, they have shown improvements in leaps and bounds. They have a good squad trained by Venkatesh."

Indian Arrows found themselves in the middle of a good run after they beat Aizawl FC 2-1 in their last game. The AIFF developmental side has now won two of their last three games and extended their points tally to 10 from 13 games.

"It's the last game of the season. We have worked very hard, the boys are sharp and look very positive. We are confident that we will put a good display of football," coach Mahesh Gawali said.

"It has been a good experience for everybody. The main task was that the youngsters get match time, experience, and gain confidence.

"We wanted them to be prepared for AFC U-19 competitions, and I believe, that the Hero I-League will help to prepare them, give them confidence, and ready them for the challenge."