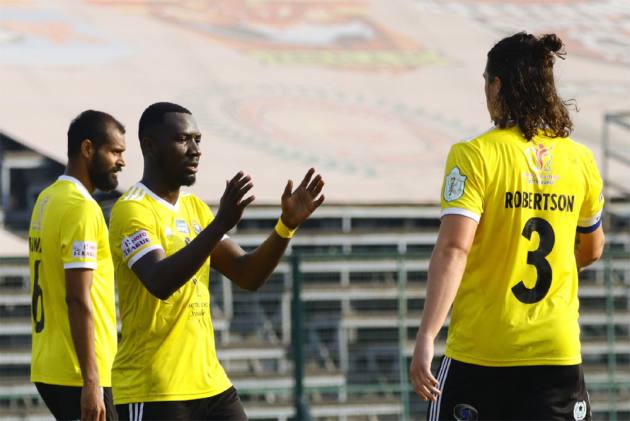 Real Kashmir FC got back to winning ways in grand fashion, inflicting a 6-0 drubbing on Indian Arrows in an utterly lopsided I-League match in Kalyani on Thursday, the result propelling the Snow Leopards into second place in the standings. (More Football News)

Coming into the match on the back of two successive draws, Real Kashmir FC showed their swiftness in the field of play before trouncing their opponents by an embarrassing margin.

Giving their fans something to cheer about, RKFC's Haroon Amiri, Lukam Adefemi and Dipanda Dicka dominated the match with their skills.

After a surge of attacks from Real Kashmir, the Arrows slowly got into the game, and put up a fight. They finally broke out and threatened the Real Kashmir goal in the 18th minute through Fela, but his weak shot was easily saved by Mithun Samantha.

Most of Real Kashmir's chances kept coming in from long balls and corners.

Minutes after the water break, Mason Robertson wasted another opportunity to break the deadlock. The RKFC skipper broke past three defenders, before releasing a low strike, only to be denied by the Arrows keeper.

The Snow Leopards finally broke the deadlock in the 42nd minute, through Dicka, as the two teams went into half-time with the score reading 1-0 at the Kalyani Muncipal Stadium.

Pratesh Shirodkar stole the ball off Brijesh Giri. Farhan Ganai then launched a long ball forward and Sajad failed to clear his line. Dicka pounced on the bouncing ball and headed it before the oncoming Bukhari to open the scoring.

Just after the first half, Lukam Adefemi's bullet header in the 51st minute left the opposition goalkeeper bewildered as the Snow Leopards doubled their lead.

Sena Ralte delivered an astonishing cross from a free-kick, which was headed home by defender Haroon Amiri to hand Real Kashmir a three-goal advantage in the 61st minute.

In the 74th minute, forward Dicka made no mistake and tapped home from a close range to score his second, and Real Kashmir's fourth goal of the match.

In the final moments of the match, Chesterpoul Lyngdoh and Danish Farooq scored one each in the 80th and 86th minute respectively to crush Indian Arrows.

It was a clinical performance by Real Kashmir in the second half as the David Robertson-coached side scored five goals in that period.

Real Kashmir made just one change from their goalless draw against Gokulam Kerala FC, as head coach Robertson brought in Farhan Ganai for Farooq.