Following the draw, reigning I-League champions Chennai City FC remain seventh on the points table with five points while NEROCA FC are one place below with four points 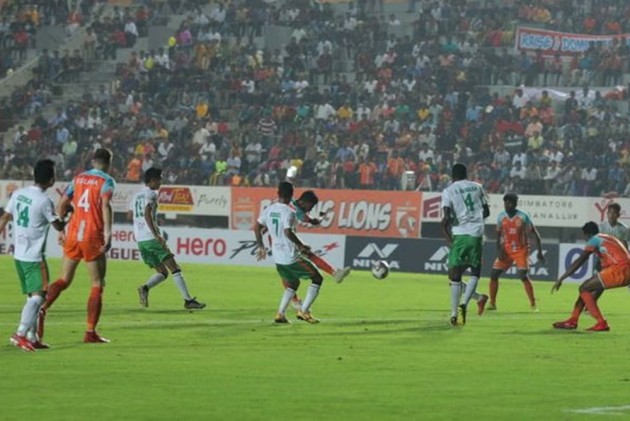 NEROCA FC came back from a two-goal deficit to secure a 2-2 draw against Chennai City FC in a Hero I-League clash at the JLN Stadium at Coimbatore, on Saturday. (More Football News)

Following the draw, Chennai City remain seventh on the table with five points while NEROCA FC stay one place below with four points.

Chennai City FC started the game on a positive note with dominating possession from the onset. They started with an unchanged line-up from the match against Aizawl FC as the trio of Fito, Pedro Manzi and Sandro were unavailable for the match.

After launching attacks relentlessly on NEROCA goal for the first 25 minutes, it seemed NEROCA's defence would hold on till the end of the half, but eventually, they faltered.

It was Katsumi Yusa who was fouled by a NEROCA defender inside the box and Chennai got a golden chance to go ahead.

In the 26th minute, Katsumi Yusa stepped up to take the penalty and converted the chance with finesse to hand Chennai a 1-0 lead.

With the clock striking 32 minutes, a beautifully built up play from the back and an inch-perfect cross into the box by Jockson Dhas found Mashoor Shereef inside the box, who didn't make any mistake and headed the ball into the goal from close to double Chennai's lead.

It was now up to NEROCA to make a comeback before they head into half-time. Both coaches made some changes within the first half as NEROCA brought on Gaty Kouami on for his compatriot Yawo Zico. Chennai coach Akbar Nawas brought in Ranjeet Singh for young Bijay Chhetri.

With Chennai City poised to go into the second half with a two-goal lead, NEROCA FC struck in 45+3rd min with a header from under-22 midfielder Khaiminthang Lhungdim.

The score at half-time stood at 2-1 in favour of Chennai City.

NEROCA stepped up the pressure on Chennai after the change of ends.

Even after playing a more pressing game NEROCA wasn't able to break the defence, but a careless mistake by the Chennai defence lead to a foul inside the box on Boubacar Diarra and a penalty was awarded. Diarra himself stepped up and scored from the spot-kick to level the score at 2-2 with the clock ticking 65 minutes.

Chennai were not ready to let it go and switched the gear but none were able to edge past NEROCA captain and keeper Marvin Devon Phillip.

In the 82nd minute, Chennai launched a counter-attack and a perfect cross from the right-wing for Chennai ended at the feet of Katsumi but he couldn't control the ball and the chance went begging.

Within a few moments, Katsumi again found himself one-on-one with NEROCA keeper but this time Phillip came out victorious.

Phillip had a couple of heart-in-the-mouth situations but the hosts were not able to exploit those situations.

In the 90th minute, NEROCA made their final change to ensure that score stays the same as defender Dhananjoy Singh replaced Siam Hanghal and managed to hold on as the match ended in a 2-2 draw.