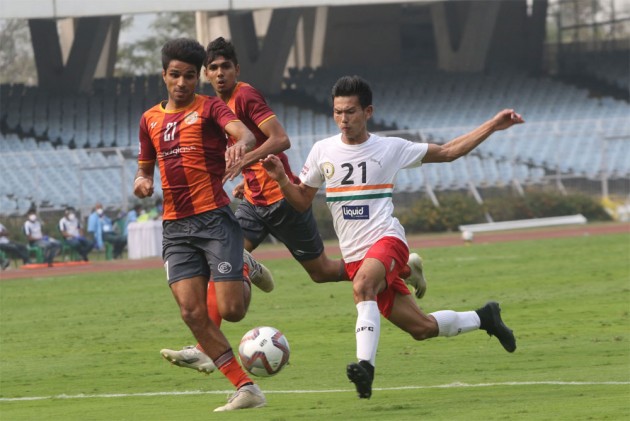 RoundGlass Punjab FC shared the spoils with Sudeva Delhi FC after playing out a goalless draw in their I-League match at Salt Lake Stadium, Kolkata on Friday. (More Football News)

This is the second goalless draw for RoundGlass Punjab FC after the stalemate against Mohammedan SC in their previous clash.

With points shared, both the teams find themselves in the midst of a mid-table fight, having earned five points from as many games.

In a frantic first 15 minutes of the match that saw end-to-end action, either team could have gone ahead, but complacency in front of the goal meant they could not take the lead.

In the third minute, a wicked deflection fell to Kean Lewis on the left flank. The midfielder knocked the ball ahead and tried to shoot from distance, but Saurabh Bhanwala got in the way to defuse the shot.

Three minutes later, it was RoundGlass Punjab FC that attacked with vigour.

A quick one-two near the edge of the box put Joseba Beitia through on goal. The Spanish midfielder wanted to find the net from a tight angle but before he could release the shot, a well-timed tackle robbed him of the chance as the ball went out for a corner.

On the 10th minute, Suranjit Singh went for the spectacular and almost found the net from distance, as his shot curled wide of the goal.

Shortly after, Nepalese custodian of RoundGlass Punjab, Kiran Limbu, almost gifted a goal when he lost possession inside the box, but made amends after latching on to a Kean Lewis cross from Shaiborlang Kharpan in the box.

A charged-up Sudeva Delhi FC looked bright in the second half and in the 53rd minute, forward Kharpan tested Limbu with a well-placed shot from outside the box, but that went inches over the bar.

Three minutes later, Aphaoba Singh was found on the right flank by a through ball from Beitia. Singh, instead of crossing it in, went for a shot from a tight angle and forced Limbu to make a crucial save.

Chencho tried to breach the Sudeva citadel in the 69th minute when a long ball found him on the right flank. The Bhutanese forward released a curling effort from a tight angle that flashed in front of the goal before going back into play.

Despite efforts from both the teams, neither could create a clear scoring chance, and half chances were cancelled out easily by the other's defence.

The best chance of the match probably came in the 72nd minute when Mahesh Singh found Naocha Singh inside the box with a through ball. The latter, however, with only the goalkeeper to beat, roofed his shot over the bar.