I Would Be Angry Too! - Diego Simeone Understands Luis Suarez, Saul Niguez's Reactions 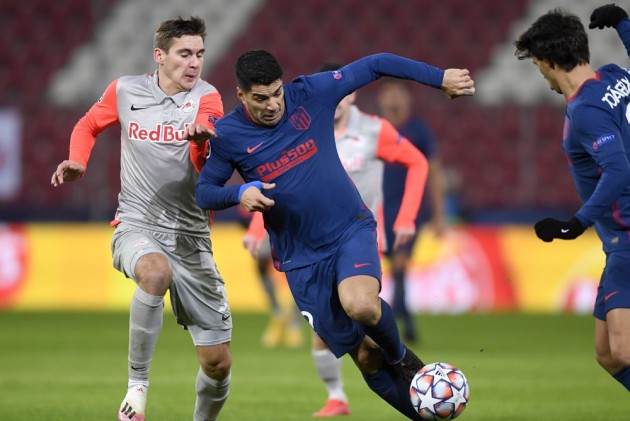 Diego Simeone understands the angry reaction of Luis Suarez and Saul Niguez to being substituted during Atletico Madrid's clash with Salzburg, saying he would have done the same. (More Football News)

Both players were taken off a little over an hour into Wednesday's Champions League game with Atleti 1-0 ahead thanks to Mario Hermoso's first goal for the club.

Yannick Carrasco went on to add a late second for the visitors as they sealed a place in the last 16 but the big talking point was the anger of Suarez and Saul.

Suarez was making his second appearance for Atleti since recovering from coronavirus and had just one touch of the ball in the opposition box, failing to register a single shot.

Central midfielder Saul, meanwhile, was unable to get too involved in a game that saw Salzburg constantly get at Atletico and register 18 attempts in total.

Simeone would also have had Saturday's local derby with Real Madrid in mind but believes the pair were justified to react the way they did.

"It is entirely logical," he told Movistar+. "I would have also been angry to leave the field. These are the games where you want to play the full 90 minutes.

"When you are taken off the pitch for someone else, it is understandable they leave the field angry."

A point was all Atletico needed to finish second to Bayern Munich in Group A and advance through to the last 16 for a seventh time in eight seasons under Simeone.

Despite being regulars in the knockouts, and twice reaching the final in the past seven seasons, Simeone insists he does not take group-stage progression for granted.

"I look back at the times we have made it out of the group stage and am joyful," he said. "It is important for us to be among the best year after year.

"For many it is entirely normal that we qualify, but for me that is not the case."

Salzburg required a victory to overtake Atletico in second place on the final matchday and twice hit the post, while Dominik Szoboszlai wasted a glorious chance at 1-0.

¡Objetivo cumplido!
It's a pleasure to play with you, bro @trippier2
#AúpaAtleti pic.twitter.com/UFtnPeN5N5

The Austrian side bow out with four points from six matches but Simeone always knew his side would be given a run for their money at the Red Bull Arena.

"At no time did we think this game would be simple," he said. "We've seen them play with a very high intensity in the past.

"It was tough for us to find our rhythm in the first half because there were lots of fouls that broke up our play.

"We had to look for space and in the second half we managed to play with a higher pace."

Carrasco was the key man for Atletico, both scoring and assisting in a Champions League game for the first time in what was his 41st appearance.

He delivered a flat inswinging free-kick for Hermoso's opener and then rounded off a swift counter with a back-post volley from Angel Correa's cross for the second.

"His second-half performance was fantastic," Simeone said. "He must continue with this type of work rate and rhythm. He is clearly an important player for us."