Due to frosty political relationship, India don't play bilateral cricket with Pakistan. They only play in multi-team world tournaments. Pakistan will host the ICC Champions Trophy in 2025. 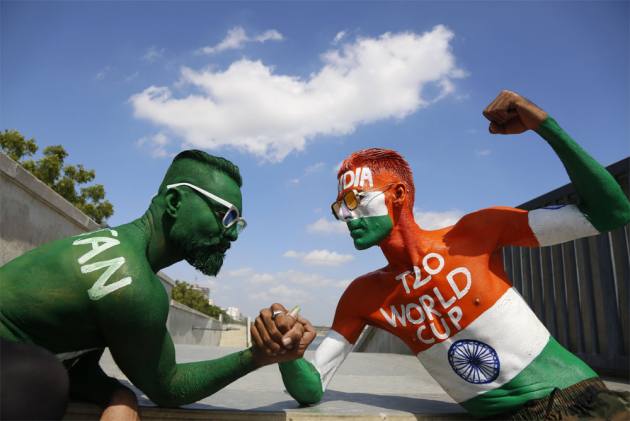 There's joy in Pakistan. After a much-improved show in the just-concluded ICC Men's T20 World Cup from Babar Azam & Co, the country's cricket board has managed to bag the rights to host the 2025 ICC Champions Trophy. (More Cricket News)

Elated with the ICC's decision to grant the rights, the Pakistan Cricket Board (PCB) chairman Ramiz Raja on Tuesday said that the sports' world body "has expressed complete confidence and faith in our management and operational capabilities and skills."

But the ICC's decision failed to inspire India's confidence. A day after the ICC awarded the hosting rights of the 2025 Champions Trophy to Pakistan, sports minister Anurag Thakur said Wednesday that a decision on India's participation in the tournament will only be taken "when the time comes" as there were still "security issues".

Well, an ICC event without India is incomplete. It's even unthinkable. Pakistan last co-hosted the 1996 World Cup along with India and Sri Lanka. Ever since, Pakistanis have been watching their favourite sport from the sidelines, literally even as their arch-enemies continue to reap the rewards.

Besides being a prominent figure in the Narendra Modi-led Bhartiya Janata Party government in the centre, Thakur is also a former boss of the Indian cricket board (BCCI). And it goes without saying that his statement gives weight to anti-Pakistan calls from certain sections of the society.

The last time India played a cricket match in Pakistan was during the 2005–06 season. With a rocky relationship between the two nations, bilateral cricket has been back-burnered. Even though the two teams continue to enthrall their die-hard fans in global tournaments, as recently as October 24 in the UAE, the nieghbours last played in a bilateral series in the 2012-13 season when Pakistan toured India for a short series. And many believed that there's very little chance of reviving this Ashes-like rivalry.

Unlike the Indian cricket board, PCB is cash-strapped. And as conceded by Raja during a Senate Standing Committee on Inter-Provincial affairs in October, PCB needs funding from the ICC to stay afloat. Ironically, he also admitted that the BCCI remains the richest and thus the most powerful cricket body.

Making things even more difficult for PCB, Pakistan has become an unwanted destination for cricket teams after the terrorist attack on the Sri Lankan team bus in 2009. With the cricket fraternity ready to help Pakistan revive the country's cricketing pedigree, other national boards continue to promise tours. But tour cancellations and last-minute withdrawals due to security concerns have only blighted the country's image.

"In the past, many countries had pulled out of going there because of security concerns. As you all know, players were even attacked while playing over there and that's a big issue," Thakur said matter of factly. "When international championships are held, many factors are taken into account. When the time comes, we will see what to do. We will assess the security situation then and decide."

2025 is still four years away from now, and a lot can happen during this period. But considering the ever-volatile geopolitical tensions between the two countries, it will be very difficult for the Indian cricket board to even get clearance from the government to travel to Pakistan. After all, cricket is part of the power game in the Indian sub-continent.

The deal is of course sealed, but the bigger problem for the PCB is finding a conducive venue to conduct the tournament and playing a perfect host. But sadly for PCB, it may not be at home.