England overhauled the target of 213 with remarkable ease to beat West Indies by eight wickets in their ICC Cricket World Cup 2019 match at The Rose Bowl, Southampton on Friday. Joe Root remained unbeaten on 100. 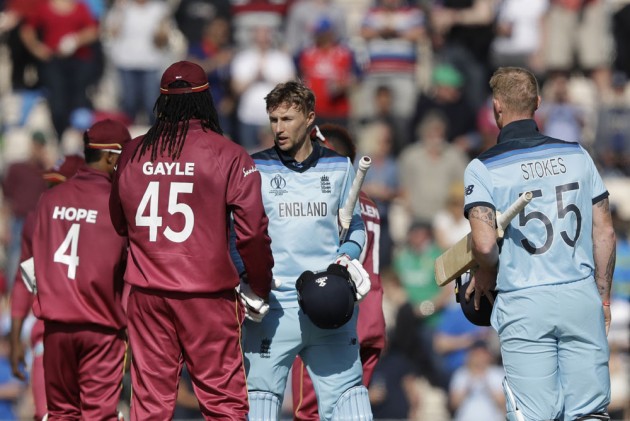 Imperious Joe Root anchored a chase of 213 runs against West Indies to give England a comfortable eight-wicket win in their ICC Cricket World Cup 2019 group match at The Rose Bowl, Southampton on Friday.

Root remained unbeaten on 100 off 94 balls as England reached the target with 101 balls to spare. In the process, he became the first Englishman to score three World Cup centuries. It was his second ton of the tournament. He also took two wickets in the match.

West Indies got a taste of their own medicine -- they had troubled the Pakistanis with bouncers in their only win thus far -- as the England pace battery unleashed fiery spells to bundle them out for 212 in 44.4 overs.

England overhauled the target with remarkable ease, completing the win in 33.1 overs as Root remained unbeaten on 100, which came off 94 balls.

West Indies owed their total to Nicholas Pooran (63), who chose the biggest stage to strike his maiden ODI fifty, and Shimron Hetmyer's (39) sensible batting on a pitch which had no demons.

They added 89 runs for the fourth wicket but West Indies' big guns failed to fire.

Extravagance, when the situation demanded patience, resulted in Chris Gayle (36) and Andre Russell (21) throwing their wickets away. The T20 style batting in the longer format cost their side dear.

Young pacer Jofra Archer (3/30) had the West Indies batsmen dancing on the pitch, troubling them with the steep bounce.

For defending 212, West Indies needed early wickets but openers Root and Jonny Bairstow (45) punctured all their hopes with a commanding 91-run stand.

It seemed the two batsmen were competing to hit most of the elegant shots one can hit. Their cover and straight drives were like an unrestrained stream of a river.

Left-arm pacer Sheldon Cottrell did ask a few tough questions to the English duo but Root and Bairstow were up for the task.

Bairstow departed when his square cut off Shannon Gabriel landed straight into the big hands of Carlos Brathwaite.

Root and Woakes (40), promoted to number three, then added 104 runs for the second wicket to push the side to the doorstep of a comfortable win.

The result catapulted England (6) to the second spot in the table behind New Zealand (7).

Earlier, the ball was hurrying on to the batsmen and whether it was a Shai Hope (11) or the big-hitting Gayle, the Caribbeans found the going tough as timing the ball was a challenge. They had already lost Evin Lewis (0), bowled by Woakes off a yorker.

Gayle, out of frustration, pulled one from Woakes, just managed an edge but escaped as Wood grassed a sitter. The marauding batter did hit a few big shots, including a massive straight six off Woakes, but did not last long, edging one straight to Jonny Bairstow off Plunkett.

Hope's torturous stay was ended by Wood when he had him trapped after reviewing the umpire's not out decision.

Pooran and Hetmyer then chose to restrain over flamboyance, steading the innings.

The duo did all the hard work, working the ball around to keep the scoreboard going in their partnership, which got broken when Joe Root had Hetmyer caught off his own bowling.

The part-time off-spinner struck in his next over too, dismissing the rival captain Jason Holder (9) in a similar fashion.

In came Russell and the ball was soon flying into the stands. He twice dispatched leg-spinner Adil Rashid into the crowd after being dropped but was dismissed, attempting another big shot off Wood.