Paceman Lasith Malinga was the star of the show in Leeds, where Sri Lanka consigned England to a surprise Cricket World Cup loss. Ben Stokes hit 82 off 89 balls but he ran out of partners. 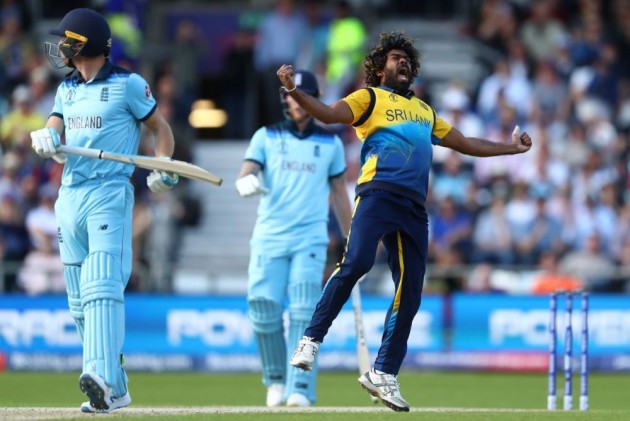 England looked to be taking another stride towards the semi-finals when they reduced Sri Lanka to 232-9 with Jofra Archer (3-52), Mark Wood (3-40) and Adil Rashid (2-45) doing the bulk of the damage.

Angelo Mathews top scored with a patient unbeaten 85 following a rapid 49 from Avishka Fernando in his first match of the tournament, but Sri Lanka's score of 232-9 appeared to be below par.

Veteran quick Malinga proved he can still be the man for the big occasion, though, taking 4-43 and becoming only the fourth man to take 50 World Cup wickets as England slumped from 170-5 to 212 all out with three overs remaining.

Stokes was left stranded on a superb unbeaten 82 after the in-form Joe Root fell for 57 on his home ground, Dhananjaya de Silva claiming 3-32 in a brilliant performance from Sri Lanka in the field.

Sri Lanka are just two points behind third-placed England, who still have Australia, India and New Zealand - the other three sides in the top four - to play in the battle for semi-final spots.

Archer and Chris Woakes (1-22) removed both openers to reduce to leave Sri Lanka in deep trouble on 3-2 after they won the toss and elected to bat.

Fernando played some attractive shots before he guided a short ball from Wood to the excellent Rashid, who was on a hat-trick after removing Kusal Mendis (46) and Jeevan Mendis.

Sri Lanka were unable to accelerate with a cautious Mathews lacking support, Root taking a fine diving catch to get rid of Dhananjaya for Archer, who ripped through the lower order along with the equally impressive Wood.

MALINGA ROLLS BACK THE YEARS

Malinga has delivered for Sri Lanka many times over the years and he snared Jonny Bairstow for the opener's second golden duck of the tournament before seeing the back of James Vince (14).

Eoin Morgan fell to Isuru Udana for 21 after his explosive hundred against Afghanistan and the hosts were 127-4 when Root became Malinga's 50th World Cup victim, Sri Lanka gaining their rewards for disciplined bowling.

The brilliant Malinga pinned Jos Buttler leg before to leave the game in the balance with Stokes holding the key for England.

Dhananjaya then came to the fore, Moeen Ali holing out with a poor shot attempting to hit a second successive six in his 100th ODI.

It was very much advantage Sri Lanka when spinner Dhananjaya had Woakes and Rashid caught behind in the 41st over - reducing England to 178-8.

Stokes continued to play with maturity as his team-mates lost their heads and he also struck four sixes, but despite farming the strike with intelligence in a final-wicket stand of 26, his knock was in vain when Nuwan Pradeep had Wood caught behind.