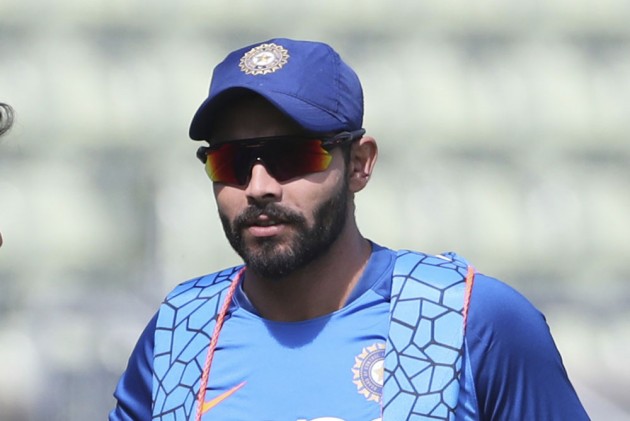 All-rounder Ravindra Jadeja on Wednesday chastised former Indian batsman and commentator Sanjay Manjrekar for his criticism of Mahendra Singh Dhoni, who is having a relatively quiet ICC Cricket World Cup 2019, and other players.

Former Indian captain Dhoni has become the flavour of the season. His failure to entertain fans as he had done his entire life in the last seven World Cup matches have left them high and dry, and everyone wants a piece of Dhoni. And leading the Dhoni criticism chorus is Manjrekar.

Also Read: Will Dhoni Play Next IPL? Manjrekar Gets Cheeky Reply From Dhoni Himself

Dhoni has scored 223 runs in seven games at a decent strike rate of 93 plus if one goes by the scorecards but what they don’t reflect is his inability to rotate the strike and strike big. Some have attributed it to the lack of intent and some have pointed out his waning capabilities as a finisher, something that had once made him a top short format player in the world. After all, he is 37. And he is probably playing his final tournament.

But there are thousands of Dhoni fans including team-mates, who still want to see the only captain to win all three ICC-sanctioned tournaments -- ODI World Cup, World T20 and Champions Trophy -- in India colours. And they still emotionally support Dhoni.

Here’s something interesting about Dhoni -. 41 off 87 balls v spin this WC. But in the warm up games 69 off 56 balls v spin. That tells me it’s mental too. He does not put his wicket on the line as much in the big games.#ICCCWC2019

And enough on Dhoni. Let’s now shift the spotlight on Lokesh Rahul. He now has the most enviable position in international cricket - Opening the innings in 50 overs cricket. Must do more than he has.#INDVBAN

Still i have played twice the number of matches you have played and i m still playing. Learn to respect ppl who have achieved.i have heard enough of your verbal diarrhoea.@sanjaymanjrekar

And here are some fan reactions:

A humble request from all the Indian Cricket Team fans, sack @sanjaymanjrekar. Please do not ruin the World Cup for us. #INDvBAN #Dhoni #TeamIndia pic.twitter.com/ViiBeRvkse

Dhoni scored 35 off 33 as India set a 315-run target for Bangladesh in their penultimate group match at Edgbaston, Birmingham. India won the match by 28 runs to qualify for the semifinals.