Despite missing the ODI series owing to a hamstring injury, Rohit Sharma remains at the second spot, five points ahead of Pakistan skipper Babar Azam, who is number three in the rankings 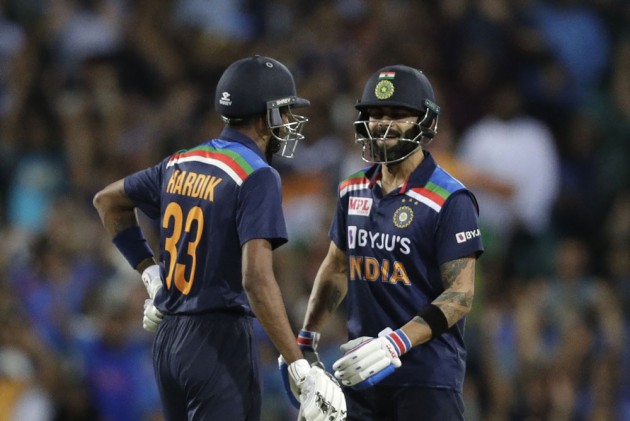 India captain Virat Kohli cemented his spot at the top of the ICC Men's ODI Player Rankings for batsmen after scoring two half-centuries in the recently-concluded three-match series against Australia. (More Cricket News)

Kohli, who had scored 89 and 63 in the second and third ODI against Australia in Sydney and Canberra respectively, has 870 points.

Despite missing the ODI series owing to a hamstring injury, Rohit Sharma (842) remains at the second spot, five points ahead of Pakistan skipper Babar Azam, who is number three in the rankings.

Playing his first ODI since the ICC Cricket World Cup 2019, India all-rounder Hardik Pandya struck 90 in the first game and 92 not out in the third to make his first appearance in the top 50 batsmen at 49th place with a career-best of 553 points.

From the Australian camp, captain Aaron Finch's innings of 114 in the first ODI, followed by 60 and 75 helped him up to a career-best tally of 791 points and fifth place, just behind his best of fourth achieved in June last year.

Steve Smith's twin centuries in the first two matches enabled him to move back into the top 20 for the first time since 2018. He is currently at number fifteen with 707 points.

Glenn Maxwell's 167 runs in the series that came at a strike rate of 194.18 and featured two half-centuries pushed him back up to 20th rank. This is the first time he has been in the top 20 since February 2017.

In a series dominated by batsmen, Adam Zampa made the big impact with the ball, enabling him an entry in the top 20 ODI bowlers for the very first time.

Zampa's seven wickets took him to the fourteenth position with a career-best 623 points. Josh Hazlewood took six wickets and moved up a place to the sixth rank.