T20 World Cup, which was postponed last year due to the COVID-19 pandemic, is scheduled to take place in India later in 2021 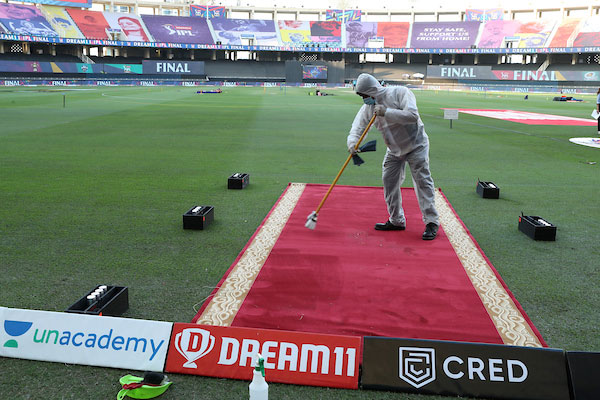 As things stand, India will host the T20 World Cup later this year in October-November. The 16-team tournament will be the first big tournament held by the International Cricket Council (ICC) in the COVID-19 world. (More Cricket News)

The global body wants to make it a full-proof event, and they are ready to learn from the Indian cricket board, the BCCI, which will be conducting the IPL for the second time in six months. The BCCI moved the world's premier franchise-based T20 league to the UAE. And the event was a grand success.

"It is extremely important for everybody to realise that in the case of risk mitigation, it is not a linear curve. For example, given a series which is a bilateral series, let's say between two teams, versus let's say a World Cup, which has 16 teams coming from 16 different countries into one country, the risks associated with that are exponentially larger and way different," ESPNcricinfo quoted ICC CEO Manu Sawhney as saying. "And those are the complexities that all of us are right now are going through and understanding each day better than the day before as to what needs to be done."

ICC sure learned from what happened with the Pakistan Super League. A string of COVID-19 positive cases, involving players, have forced the Pakistan Cricket Broad to postponed the league indefinitely. Now, the focus will be on the IPL, which will be played in six venues behind closed doors.

"So, for us right now, learning from what is happening in the various T20 leagues, learning from what India is doing currently - and BCCI has done a great job - and post this the IPL will be a very key factor in terms of learnings before we look at what are the protocols we'll have to follow for the T20 [World Cup] later in the year," he added.

Meanwhile, BCCI president Sourav Ganguly has said that allowing the crowd in IPL 2021 would have been a bigger logistical issue compared to letting in limited fans during the recently-concluded Test series against England.

The board announced that no crowds will be allowed at the venues -- Mumbai, Kolkata, Delhi, Chennai, Bengaluru and Ahmedabad -- where the IPL matches will be played with no home games for any franchise.

"We have planned it well and we are doing it in clusters. There will be three chartered flights (at the max) for every team. Hopefully, we will be able to manage.

"During England tour, teams have only two domestic chartered flights (Chennai to Ahmedabad and next will be Ahmedabad to Pune)," Ganguly told the channel.

"The numbers are much less but fingers crossed as it's a huge tournament, the BCCI did it successfully in Dubai and hopefully, we can do it this time as well," he added.

He didn't say when would the BCCI consider having crowds back for IPL.

"Dont know yet, depends on situation. Dubai also was the same," he said referring to the 2020 IPL in the UAE.

"It's slightly different from bilateral. If you open up for crowd (in IPL) with teams practising outside the stadiums, you expect crowds to get closer to practising teams during IPL, so that could be a risk," he said with a note of caution.