Australia won the toss and chose to bat first at the Melbourne Cricket Ground (MCG). This is the second meeting between the two sides in the tournament with India having beaten Australia by seven wickets in the opening match of the tournament 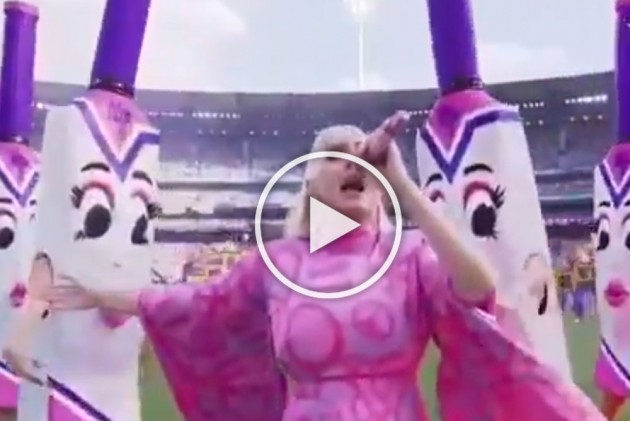 American singer Katy Perry performed some of her famous songs to set the stage for the ICC Women's T20 World Cup 2020 final between Australia and India at Melbourne on Sunday.

Celebrating International Women's Day, the 35-year-old singer opened the finale between India and Australia with two of her biggest hits -- "Roar" and "Firework" and enthralled over 80,000 spectators at the prestigious stadium.

God is a woman and her name is Vocal Queen Katy Perry. #T20WorldCup pic.twitter.com/rk5l1STwBw

.@katyperry during the performance of “Firework” at the #T20WorldCup final, in Melbourne. ðÂÂÂÂÂÂÂÂÂâÂÂÂ¨

Australia won the toss and chose to bat first at the Melbourne Cricket Ground (MCG). This is the second meeting between the two sides in the tournament with India having beaten Australia by seven wickets in the opening match of the tournament.

This will, however, be only the second time that India will be chasing. Incidentally, their last match of the tournament was also a chase when they beat Sri Lanka by seven wickets in their final group stage match.

"Crowd's exciting, looking forward to it. Every game has been close, but we need to be at our best today. Hopefully, it's a great game. We are going in with the same team tonight," said Australia captain Meg Lanning.

Indian captain Harmanpreet Kaur, who is celebrating her 31st birthday, said that they too would have liked to bat first.

"My mom's sitting somewhere in the stands. It's a pressure game and we also wanted to bat first. We are quite confident while chasing, hopefully, the bowlers restrict them. We did some indoor practice. We are trying to stay together because you are not getting games it tends to affect your focus. We want to treat this like any other game and give our best shot," she said.