After four washed out World Cup games, England can take a lesson from BCCI, which provides world-class ground equipment to its affiliates to protect field from rains 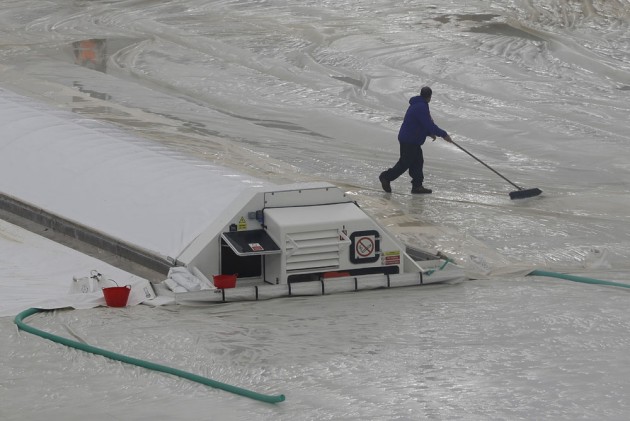 It is an area in which the England and Wales Cricket Board (ECB) would do well to take a lesson from the Board of Control for Cricket in India (BCCI) – rather, from its affiliated state associations. We are referring to the art of covering the playing surface at international venues to avoid periods of play/matches being washed out following heavy rains. So far, four matches in the ongoing World Cup have been washed out, three of them without a delivery being bowled, after rains made the outfield unplayable in the absence of proper ground covers.

The abandoned matches included an India-New Zealand tie at Trent Bridge, Nottingham, on June 13. At this venue, only the bowlers’ run-up and some portion on the sides of the pitches were covered, but most of the outfield was left uncovered. And some water was seen spilling over from the covers on to the ground when the ground staff removed them. The entire exercise looked a bit unprofessional.

If an English ground didn’t have enough sheets to cover the entire ground in case of rains, more could have been borrowed from a neighbouring county. And since distances in England are much less than, say, in India, it could have been easily done with a bit more sincere planning.

Also Read: Here's How Much An Abandoned Match Will Cost India

While it is an absolutely legitimate and valid argument that no human being has control over nature, some of the supposedly wisest cricket administrators in the World Cup could have prepared better, especially for a competition as important as this, knowing the forecast full well, that rains would occur many times during the 46-day tournament.

England, the country where cricket is supposed to have been born, should have shown the way in this regard, and in this day and age when technology has improved by leaps and bounds globally. But India seems to gone far ahead of England, the country that introduced the game in the subcontinent. Indian grounds, especially the international venues, have transformed beyond recognition in the last ten years or so. Venues like Nagpur, Kolkata, Chennai, Mumbai, Mohali, and Delhi have world class ground equipments to protect the pitches and major portions of the outfield, if not full, in cases of rains.

Also Read: Why There Are No Reserve Days In This World Cup

While Cricket Association of Bengal (CAB) has the covers to protect the entire vast outfield of the Eden Gardens in Kolkata, the Vidarbha Cricket Association (VCA) stadium in Jamtha, on the outskirts of Nagpur, can also cover “major portion” of the big ground when it rains. “We have the covers to protect a major portion of the ground, besides having a proper drainage system at the stadium. We also have water conservation system at the ground,” VCA president Anand Jaiswal told Outlook. He was sorry for the matches being washed out due to outfields left soggy after rains, and felt England could take a lesson from India in protecting the field of play.

Bangalore’s M. Chinnaswamy Stadium has gone a step ahead and embraced a wonder technology that sweeps all the rainwater from the outfield within minutes, enabling a match to restart. It is called sub-air subsurface aeration and vacuum powered drainage system, and it cost Karnataka State Cricket Association (KSCA) over Rs 4 crore. The system clears water 36 times faster than the traditional methods, draining out 10,000 litres a minute, and it starts working automatically the moment it starts to rain.

“M. Chinnaswamy Stadium is the first and, I think, the only ground in the world to have this system. After the rain stops, it makes the ground ready for play within 15 minutes. It is operated by a remote, so if the man controlling is not at the ground he can still operate it from wherever he is. And because of this system we don’t need covers or the super sopper (though KSCA does have covers and super soppers). England should 100 per cent take a lesson from us in this area,” KSCA secretary Sudhakar Rao K. told Outlook.

The major credit for India having world-class covers at its international venues (and even in many domestic venues) goes to the BCCI. For many years, the BCCI has been importing ground equipment like pitch/ground covers, super soppers, and carts that carry equipment quickly into the ground etc. and providing them to its affiliates as a discounted rate. On the recommendation of the Sports Authority of India (SAI)/government, the customs department doesn’t charge the import duty on these ground equipment, bought mostly from Australia, for the BCCI’s affiliates.

The result is there to be seen. If there was a comparison between Indian and English international venues of how well equipped they are in terms of latest ground equipments/gadgets, chances are that the Indian venues would fare much better than their counterparts. But that shouldn’t surprise anyone in India anymore.