India's pacer Jasprit Bumrah has called England the "most difficult place" for a bowler in white-ball cricket. Bumrah has taken five wickets so far in the ICC World Cup 2019. 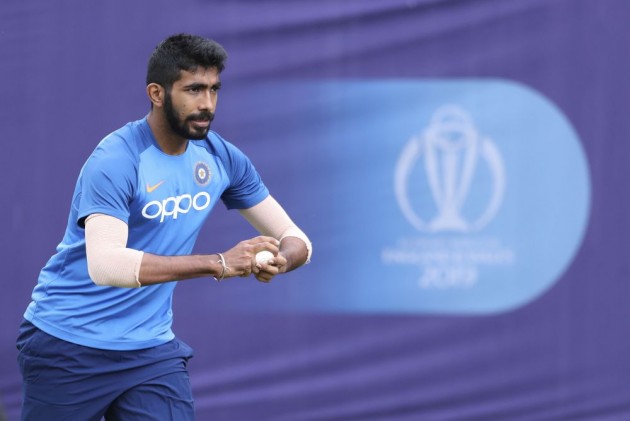 World's premier fast bowler Jasprit Bumrah on Thursday said the pitches in England used for white ball cricket are the "flattest tracks" he has ever bowled on as there is rarely any movement in the air or off the pitch. (2019 CRICKET WORLD CUP FULL COVERAGE)

Bumrah, one of the most important components in the Indian set-up, busted the myth about English conditions and tracks during an interaction with the media.

"Whatever white ball cricket I have played so far, the flattest wickets are those in England. I feel England is the most difficult place for a bowler," he said.

"You see cloud cover and feel that the ball will swing but neither there is seam movement nor there is swing," said Bumrah, whose assessment will not exactly be music to the ears of ICC or England and Wales Cricket Board.

Bumrah said when they play in England the Indian bowling unit is always ready for the worst case scenario and if some help is available, they treat it as bonus.

"You have to rely a lot on your accuracy and clarity. So that's what we try to do. We know that wickets are flat in England and while bowling, we take that into consideration as the worst possible scenario. So if there is a bit of help, then adjustment becomes easy," he said.

Bumrah, who bowled a lethal first spell against South Africa in India's World Cup opener, feels the track at Southampton was a decent one first up but stroke making became easier once the two new balls got a bit old.

"In the first game that we played here, there was some help with the new ball but it was a decent wicket. But as soon as the ball got older, it became better to bat on. Oval was a batting wicket, where you saw 350 being scored," he observed.

Bumrah feels that it is better to analyse the wicket on the match day and decide accordingly.

"But you don't focus on these things. You see on a given day, what works for you. So quickly analyse the wicket and see if there's no help, you go back to your strengths," he said.

"When sometimes there is help, you try to swing the ball and take some wickets," said the bowler, who has scalped five wickets from three games so far in the World Cup.

Bumrah also said opening the bowling with Mohammed Shami will hardly make a difference as all three (Bhuvneshwar Kumar, Shami and him) have bowled together a lot of times.

Normally fast bowlers don't go full tilt at the nets especially when they are playing matches regularly but the case is different for Bumrah.

Bumrah had KL Rahul and Virat Kohli in all sorts of trouble during Thursday's net session.

A perfect yorker found Rahul wanting as he failed to bring his bat down and the right-hander's off-stump pegged back.

When Kohli batted, he got one to just shoot up from short of good length and the world's most fearsome batsman was seen literally ducking for cover.

The ball hit the top of the bat and flew. If it was a Test match with a gully fielder, the Indian skipper was gone for good.

But Kohli is not angry at all. He says something which isn't audible but the smile said it all. The skipper was impressed.

Then there was one that pitched on length and beat the bat. From the angle one watched it, it was difficult to say if there was movement off the deck but it was at a fair clip.

There weren't anymore smiles as the skipper defended the next few confidently.

Ask Bumrah about that and he echoes his captain's observation about him.

"Be it a death bowling session or with new ball, I do it in the nets. You watch the batsman's feeds and try to replicate that in the nets," he said.