Bruno Fernandes was unable to rescue Manchester United's FA Cup campaign at Leicester City, with Paul Pogba only fit for an hour 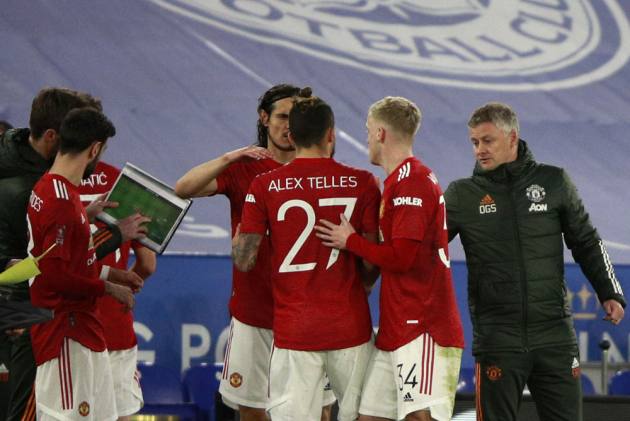 Ole Gunnar Solskjaer insisted he had no regrets over his team selection after Manchester United lost 3-1 at Leicester City in the quarter-finals of the FA Cup. (More Football News)

Mason Greenwood equalised shortly before half-time in a rare moment of inspiration for United, as Paul Pogba and Donny van de Beek combined to fine effect.

But the midfield duo were only fit to play for an hour, having recently returned to action, and Bruno Fernandes was unable to have a decisive impact from the bench.

Solskjaer felt such juggling was a necessity after a packed schedule in which his side overcame Milan in the Europa League on Thursday.

"I would have started the same team again. We felt [Pogba and Van de Beek] had more than 45 minutes in them," he said.

"They're important players for us, that's why we started them.

"We knew players like Donny and Paul wouldn't last more than an hour."

Fernandes' 23 goals and 13 assists mean he leads the way in both categories for United this season.

However, among outfield players, only captain Harry Maguire (3,945) and fellow defender Aaron Wan-Bissaka (3,651) have played more minutes than the Portugal playmaker's 3,488 for the Red Devils across all competitions.

1 - Manchester United have lost an away match against English opposition for the first time in 30 matches, with the previous such defeat coming against Liverpool in January 2020. Closed. pic.twitter.com/OAGxOKEuke

"Every team selection has reasons behind it. Bruno has played very, very much football," Solskjaer said.

"The boy is a human being. He has played a game every three or four days.

"It was a chance to start both Donny and Paul. The accumulation of games maybe caught up with us.

"With Bruno, I know he wants to play but sometimes you make decisions for the benefit of both the team and him."

While plenty of managers will be apprehensive about the forthcoming international break and what it might mean for their players at the business end of the season, Solskjaer believes it comes at a good time for certain members of his squad.

"I think the international break will give Paul and Donny chances to play, it'll give Anthony [Martial] a chance to go away," he said.

"They will get a change of scenery. You get energy from that. The boys have been at Carrington training ground now every day for a long, long time.

"The break comes at a good time and we'll be ready at Easter, don't worry about that."

Solskjaer added: "If and when we're successful, we have to handle [fixture congestion] and hit a higher level than we did today.

"That's what we're striving towards and, under these circumstances, which are unprecedented, I've been impressed by my boys.