Inter coach Antonio Conte would throw himself "into the fire" for his players, whom he celebrated with after their winner against Cagliari 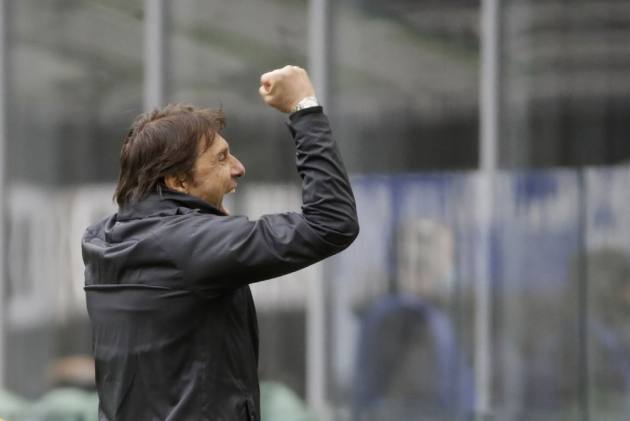 Antonio Conte said his exuberant celebration was a "reward" for the team after Matteo Darmian's winner for Inter in the Serie A leaders' 1-0 victory over Cagliari. (More Football News)

Darmian converted Achraf Hakimi's cross to the far post 13 minutes from time as Inter took another step towards the Scudetto, maintaining their 11-point lead at the top.

Conte reacted to the goal by running down the sideline and leaping into a celebratory huddle with his players before then planting a kiss on creator Hakimi.

Milan put some pressure on by defeating Parma on Saturday, and Conte believes Inter's triumphant response was worth double with just eight games left in the season.

"I'm always stressed but the celebration was a reward for the lads, as was the kiss to [Achraf] Hakimi," Conte told DAZN.

"I don't consider myself to be an older brother but I often kiss them on the forehead, they know the affection I have for them and that I'm ready to throw myself into the fire for them. Hakimi deserved it, as did Darmian.

"I keep repeating the same thing. The matches are becoming fewer and the victories start to be worth six points.

"Milan won yesterday in Parma and it was important for us to maintain the distance at the top, but by now we are used to this type of situation.

"For many it is the first time they are playing under this pressure and having to win because others are picking up points, but I am very satisfied with the progress of these guys.

"We have grown so much in the space of under two seasons from every point of view, and show this every Sunday.

"I say the 'countdown' to the title in quotations, because we play to win and always push forward. We are not a team that makes calculations and I do not want us to, because I like winning too much and I want the players to feel this too.

"The objective is in sight but we are not there yet, we have won three big games in eight days but at the same time we know it's not enough because there are eight more matches."