In India's Hockey Revival At Tokyo Olympics, Pakistan Sees Hope For Itself Too

Pakistan's Samiullah, who was a member of two World Cup-winning teams, said India's success was due to their big pool of talent. 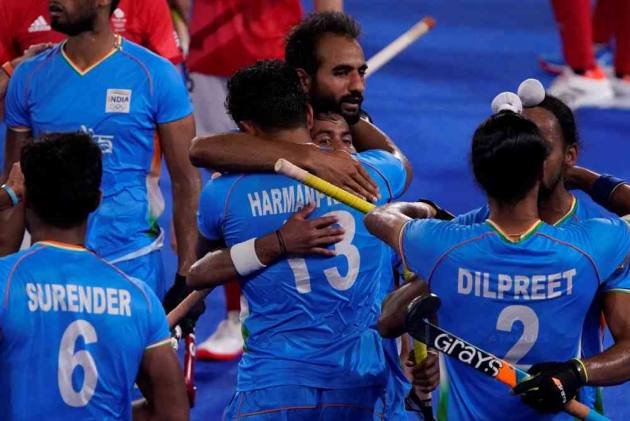 The resurrection of Indian hockey in Tokyo Olympics has brought joy to even Pakistan as the legends of the game here believe that the arch-rivals' resurgence would help arrest the sport's decline in their own backyard. Tokyo Olympics | Full Schedule | Sports News

Both the Indian men's and women's teams have advanced to the semifinals to be within touching distance of medals that are expected to galvanise hockey like never before in India.

Pakistan, on the other hand, failed to even qualify for the Games for a second successive time.

"It is a big success for the Indian hockey structure...It is all about money and unless we don't invest in hockey and take care of players where will we get the talent from. In Pakistan youth goes towards cricket because they know they have a secure future in hockey that is missing," he told PTI.

Hasan, who scored the winning goal when Pakistan won the Olympic semifinal against Australia in 1984 and went onto win the gold, said it was good to see the Indian team combining modern day tactics with some old style Asian skill sets.

"The key to hockey today is fitness and this Indian team looks to be very fit," he said.

Praising the performances of the Indian teams, Pakistan Hockey Federation secretary-general Asif Bajwa told PTI that their success would lead to a revival of interest in hockey in the region.

"It is not a small achievement that India has qualified for the Olympic semifinals...I say it will lead to a revival of the game in Pakistan because we have always been fierce rivals and people in Pakistan will now want our team to be back at the top as well," Bajwa said.

The former Olympian, who featured in the Pakistan team that won a bronze medal in the 1992 Olympics and the 1994 World Cup title, said India were reaping the rewards for restructuring their hockey set-up.

"In India the Indian hockey federation has over Rs 1000 crore in their account while their government also funds them...Today if you want to progress in hockey and remain at the top, a lot of money is required," Bajwa said.

He said there were a number of reasons for hockey's decline in Pakistan.

"I don't want to go into that but to be in the top five teams you have to play at least 25 to 30 international games a year. India is doing more than that and plus they have aligned their structure on modern lines," he pointed out.

Samiullah Khan, who was nicknamed 'flying horse' for his speed, said he is very happy to see Asian teams do well in the Olympics.

"Till 1984 Pakistan and India were fierce rivals in the Olympics and did well but after that the Europeans started dominating.

"But now it is good to see India qualify for the semifinals and I hope they can make the final and win a medal," Samiullah, a former Pakistan captain and coach said.

He said India's performances would certainly revive interest in the game in Pakistan.

"In Pakistan, hockey has gone down badly because of poor management and because we didn't pay attention to improving our structure over the years. But even now I believe that if steps are taken and money is invested in the sport we can make a strong comeback. Hockey is in our blood," he asserted.

Samiullah, who was a member of two World Cup-winning teams, said India's success was due to their big pool of talent.

"They are providing incentives to players, looking after them and their selection and management is very fair, which is what is needed in Pakistan," he said.

Interestingly on Sunday, Prime Minister, Imran Khan said he would be be focussing on sports in his last two years before elections as there was a dire need to also revive hockey and other sports in the country.

Pakistan hockey's 'Maradona' and captain of the team that won the 1994 World Cup, Shahbaz Ahmed said India’s impressive show in the Tokyo Olympics confirmed that Asian teams could still remain in the top four of the world.

"India have really done well even after their 7-1 defeat to Australia that is a remarkable comeback. Watching an Asian team do well in the Olympics I hope youngsters in Pakistan will also renew interest in this wonderful sport.

"...there is no doubt that if hockey is to be revived in the country the government has to provide the funds."

Shahbaz advised the Indian team not to play an open game against Belgium in the semifinals on Tuesday.

"Don't give them space, that is the key to beating them Belgium are a very dangerous side."

"It just shows the amount of interest in hockey in India. After this Olympics I am sure more young boys and girls will start playing hockey in India and it will only get better for them.

"It is just so good to see Indian women doing so well in the Olympics it gives us women athletes in this region hope as well."