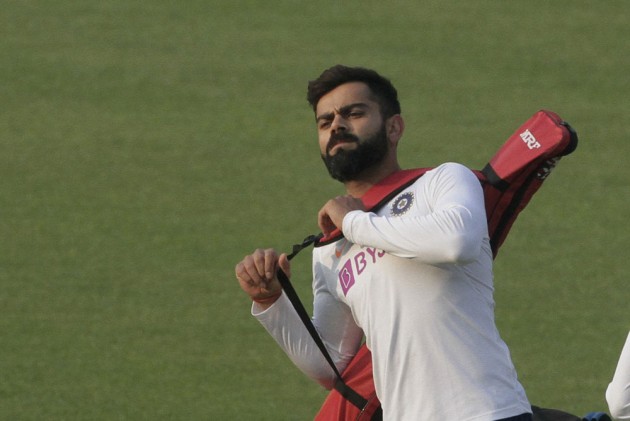 The pink ball feels like a "heavy hockey ball" to Virat Kohli, who is extremely wary of the challenges its weight, hardness and colour could pose while fielding.

Indian cricket will finally embrace the pink revolution when Kohli's formidable team lock horns with a deflated Bangladesh in their maiden Day-Night Test starting at Kolkata on Friday.

"One thing that surprised me was the fielding sessions. In the slips balls hit so hard it almost felt like a heavy hockey ball, all those synthetic ball that we're used to play with during the younger days," Kohli said on the eve of the match.

"It's purely because of the extra glaze on the ball, it is definitely much more harder. For some reason it felt heavy and even the throws took a lot more effort than the red colour to reach the wicketkeeper."

India had their first brush with the SG pink ball after they wrapped up the opening Test inside three days in Indore.

India had a session under lights at the Eden Gardens on Wednesday.

"I think during the day, high catches will be very difficult. With the red or white ball you have the idea of when the ball reaches you but with the pink ball if you don't look at it your palms are gone.

"Fielding session for me was far more challenging. People are going to be surprised how challenging pink ball can be."

Visibility in twilight has also been cited as one of the biggest challenges the historic match could pose.

"Not having a great visibility and the ability to pick that colour makes it even more difficult. The decision making has to be very precise like the idea of off stumps. Even when we practised yesterday we felt as if the ball is far but it hits you very quickly.

"The extra glaze of the ball is making it travel faster. It hits the hand hard. It should excite everyone. Sometime you have to change the template. I think we have to be very precise and our skills will be tested in this Test."

Since the first Day-Night Test between Australia and New Zealand in 2015, 11 matches have been played under lights, but in Indian conditions the dew could play a more influential role, according to Kohli.

"That is one difference in playing Day-Night Test in India compared to any other country. Apart from that I don't really feel there is any major difference. Dew is something which is definitely going to be a factor in India in the late last session.

"We spoke to the match referee yesterday. You can't really predict how much mopping or cleaning of the dew is required at what stage, you never know when the dew is going to arrive.

"He (match referee) had the same discussion that we'll have to play it as it comes and manage it in the best way possible. That's the only change I see."

According to the skipper, the pink ball will do a lot more away from India.

"Obviously the pitches and how much the Kookaboora does is a different ball game altogether. I think the pink ball will do a lot more in foreign conditions than it would in India, probably in the second and third sessions as well.

"These are the few changes I presume but again they could be totally inaccurate until you go out and experience that. From the outside, it looks like these are the few things that might be different," he said.