During second day's play of the first Day-Night Test match at Eden Gardens, Mehidy Hasan hit Mohammed Shami for a strange six, which left everyone at the stadium shell-shocked 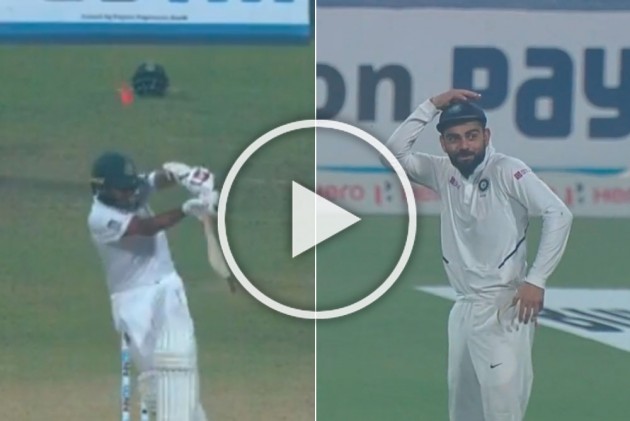 There was nothing much to write home about Bangladesh's performance in the Day-Night Test match against hosts India at Eden Gardens, which concluded inside three days on Sunday. They lost the match by an innings and 46 runs to lose the two-match series 2-0. But during second day's play, two Bangladeshi batsmen found themselves amused courtesy a bizarre six.

Mehidy Hasan hit, or was rather forced upon, a six by Mohammed Shami in the 24th over of Bangladesh's second innings. Shami sent in a well-directed bouncer to the right-handed batsman at a good pace. With no clue, Hasan presented the bat.

Here's how commentator Sanjay Manjrekar described: "Would you believe that? Watched this game over the years, I don't think I have seen anything like this... a short ball, it's got the leading edge and gone over third man for a six."

Athar Ali Khan, who shared the mic with Manjrekar, added: "He's never in control, Mehidy Hasan. It's a short delivery. Look at the position he gets himself in... leading edge and it flew all over. Incredible."

"Glad, it's not gone into the stands. Everyone's shell-shocked," Manjrekas continued, even as the replay of the shot showed a bemused Virat Kohli.

Between the deliveries, an animated Hasan and his batting partner Mushfiqur Rahim heartily discussed the shot. Hasna made 15 off 22 balls, with the help of two fours and that six, before another short ball, this time from Ishant Sharma, ended his stay.