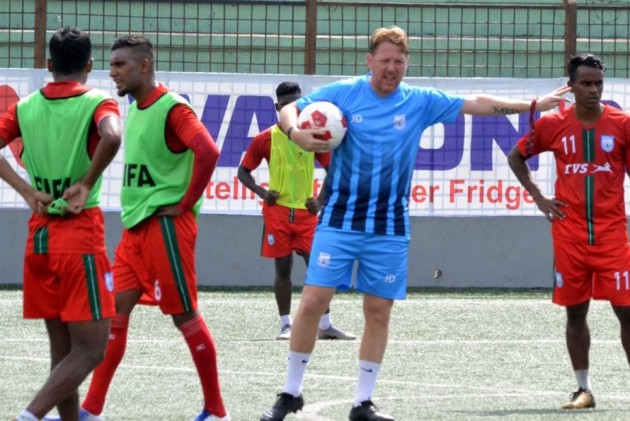 The injury-induced absence of Sandesh Jhingan may have hurt India's defence but Bangladesh head coach Jamie Day on Friday said the Sunil Chhetri-led side will still start overwhelming favourites in the upcoming FIFA World Cup qualifier.

Jhingan suffered a tear on his Anterior Cruciate Ligament (ACL) tear on his left knee during their 1-1 draw against North East United on Wednesday as the defender will have to undergo a surgery that may rule him out for six months.

Jhingan is the latest addition to list of injured players in the Indian team which will also be without Rahul Bheke but the Englishman coach remained realistic on his team's chances.

"I don't see it any different from before that he's injured. India are at home and expected to win," Day told PTI.

Bangladesh are placed 187 in FIFA table, compared to India's rank of 104.

Bangladesh arrived in Kolkata on the back of a 0-2 loss to Asian champions and group E leaders Qatar in Dhaka on Thursday.

"Everything is very positive and we are extremely pleased with our performance."

India on the other hand held Qatar to a goalless draw in their away fixture last month as the former Ebbsfleet and Welling manager said they have made rapid progress under Igor Stimac.

"I have seen the progress India has made in recent times. In fact, the team made great strides under an English coach before Igor Stimac took over. I haven't met or spoken to Igor. But I am looking forward to meeting him soon."

"I think coming over straight after the Qatar game gives us a few days to settle down, prepare, and help us for the game on the 15th," he said looking ahead for the Tuesday's clash at the Saltlake Stadium.

Bangladesh have assembled with a young squad and Day said, "The U-23 Bangladesh boys did exceptionally well in the Asian Games. We wanted to test and push them further."

"But at the same time, I also believe you need some experience around them to help guide during camps, and International matches."

Under Day, Bangladesh have won seven of their 13 International matches since May 2018 and the Englishman hopes to build on the foundation.

"I think we have become stronger as a team, and are much organised at the moment. All of that has made us a difficult team to beat. But we also intend to build on that, and make no mistake -- we have now learnt how to win matches since I have taken over," he asserted.