MS Dhoni and KL Rahul hit centuries to help India beat Bangladesh by 95 runs in the final warm-up match of the ICC Cricket World Cup 2019 at Sophia Gardens,Cardiff on Tuesday

India hit the ground running, as they say, with a very good all-round performance a confident Bangladesh -- winning the final warm-up match of the ICC Cricket World Cup 2019. The two-time champions also found answers to that nagging number four problem, with talented KL Rahul all but sealing the spot. Then, there was MS Dhoni's form. The legend is in the mood, and that augurs well for India. But Indian top order continues to struggle against the moving ball.

In another warm-up match, West Indies overwhelmed New Zealand. The real fight begins the day after tomorrow with hosts pre-tournament favourites hosting perennial bridesmaids South Africa at The Oval. By the way, Dale Steyn has been ruled out of tournament opener.

Rahul (108 off 99 balls) took the attack back to the opposition after early dismissals while Dhoni's free-spirited approach also got him a century (113 off 78 balls) as their 164-run stand powered India to 359 for 7 against a Bangladesh attack that went off the boil.

If Rahul and Dhoni were the biggest positives to have emerged from batting, Kuldeep Yadav (3/47 in 10 overs) and Yuzvendra Chahal (3/55 in 10 overs) also gained in much-needed confidence going into the tournament proper.

It was a walk in the park for India, whose pacers Jasprit Bumrah, Mohammed Shami and Bhuvneshwar Kumar bowled only 14 out of the 49.3 overs.

For skipper Virat Kohli and coach Ravi Shastri, the biggest satisfaction has to be Rahul's performance at No 4. His technique was perfect and the risk-free attacking batting as per Shastri's lingo was "just what the doctor ordered".

And what could make Rahul's case even stronger is the fact that Vijay Shankar had a forgettable game (2 off 7 balls and 0/46 in 6 overs) in both departments.

11:31 PM IST: A run out to finish the run chase for Bangladesh. Everybody wanted to go 'home',  and the third umpire has it. Mehidy Hasan ran out, good throw from Yuzvendra Chahal to Dinesh Karthik. Bangladesh-264 all in 49.3 overs. India won by 95 runs.

11:27 PM IST: Yuzvendra Chahal gets his third wicket. He had Saifuddin (18 off 25) caught by Kuldeep Yadav. FoW-262/9 (48.4 overs). Rubel Hossain is the new man. Two runs from the over to end his spell. Chahal's figures: 3/55. Bangladesh need 98 runs in 6 balls. Ravindra Jadeja to bowl the last over of the warm-up fixtures. At Bristol, West Indies have defeated New Zealand by 91 runs.

11:22 PM IST: Sloppy from India. First a wasted LBW review for a delivery which was pitched outside leg, then five overthrows as KL Rahul failed to stop a throw. Vijay Shankar leaked 46 from his six overs. BAN-260/8 after 48 overs. 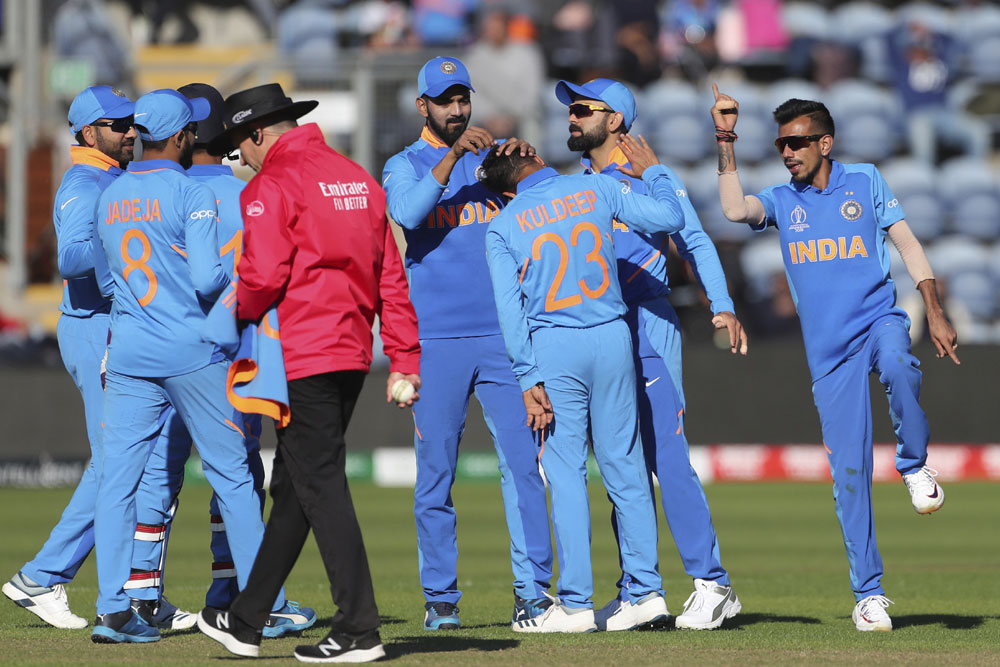 10:53 PM IST: Third back-to-back wickets for India in the match. Kuldeep Yadav cleans up Mushfiqur Rahim (90 off 94), then sends Mosaddek Hossain for a duck, stumped by Dinesh Karthik. Mohammad Saifuddin joins Sabbir Rahman in the middle, and Yadav fails to get a hat-trick. BAN-216/7 after 40 overs. They need 144 runs.

10:22 PM IST: Another back-to-back wickets for India. Yuzvendra Chahal gets the wickets of Liton Das (73 off 90), stumped and Mohammad Mithun (0 off 1), LBW off successful deliveries. Chahal on a hat-trick, but Mahmudullah blocked it. BAN-169/4 after 32 overs. They need 191 runs.

9:55 PM IST: Vijay Shankar and Yuzvendra Chahal bowling in tandem, without success. Liton Das hit Chahal for two fours in the 24th over, then Mushfiqur Rahim hit Shankar for a four and a four in the next over. Das is batting on 55 off 68, while Rahim is on 48 off 53. They have added 90 runs for the third wicket in 91 balls. BAN-139/2 after 25 overs. They need 221 runs.

MS Dhoni comes into keep the wicket after 15 overs. 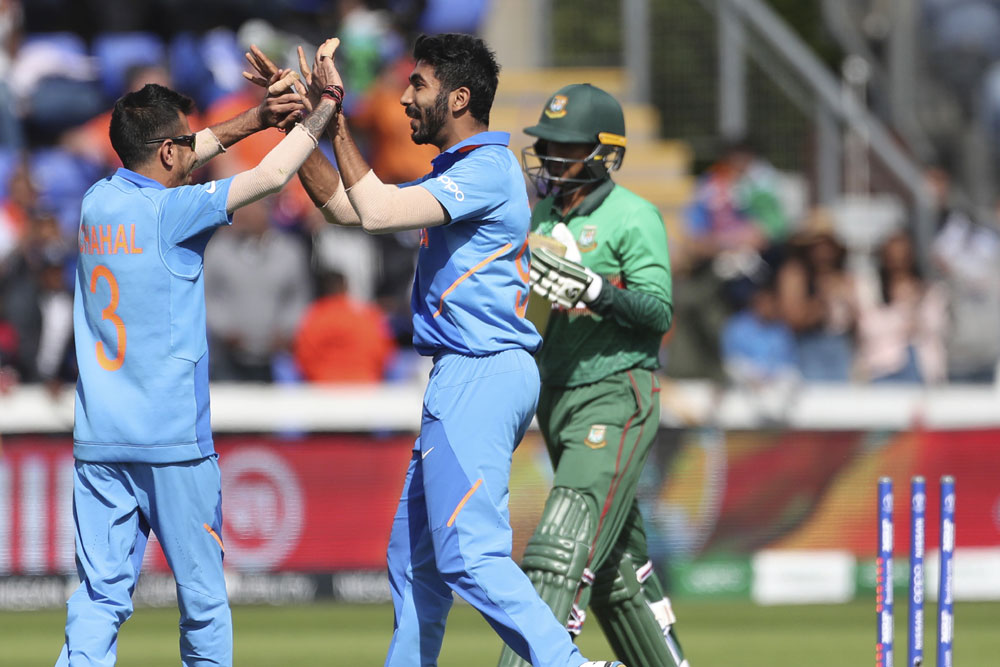 8:12 PM IST: Strong start from Bangladesh openers Liton Das and Soumya Sarkar. Mohammed Shami started the proceedings with a 12-run first over, with Sarkar hitting a four and a six off the last two balls. Jasprit Bumrah conceded four runs -- two singles and a double -- from his first over. BAN-16/0 after two overs.

MS Dhoni is not keeping the wicket. Dinesh Karthik will keep for the second match in succession.

7:18 PM IST: What an over. Five wides, then a six and a four as Hardik Pandya punishes Shakib Al Hasan with some lusty hittings. Another wide, down the leg. Another wide. Pandya (21 off 11) holed out at long-on, caught by Sabbir Rahman. FoW-325/6 (47.3 overs). Dinesh Karthik is the new man, and he survived a LBW review with ball pitching outside leg. And Dhoni remained on 99. IND-327/6 after 48 overs. 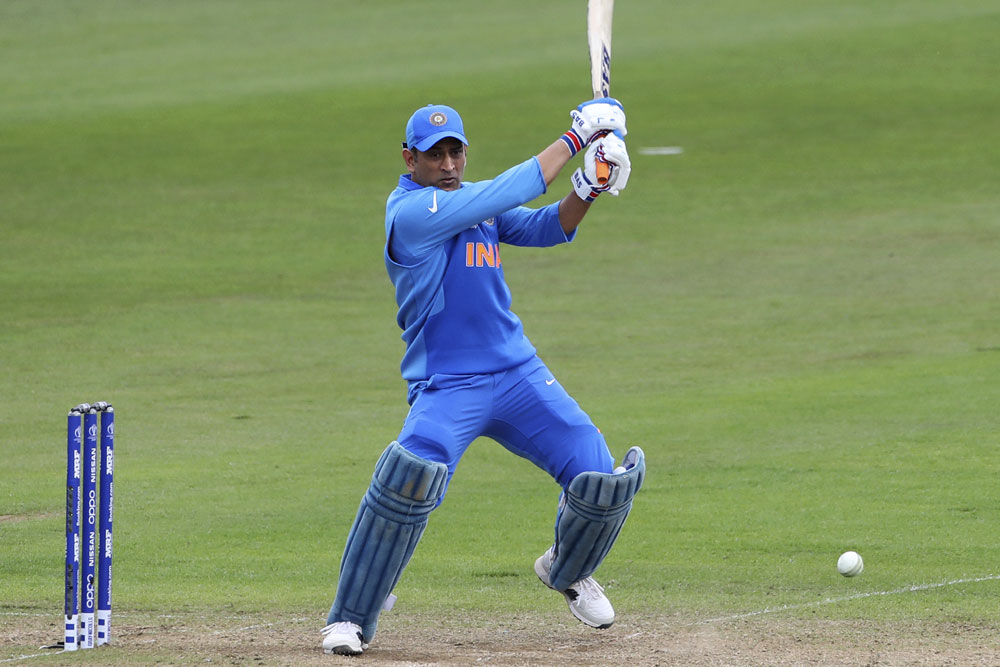 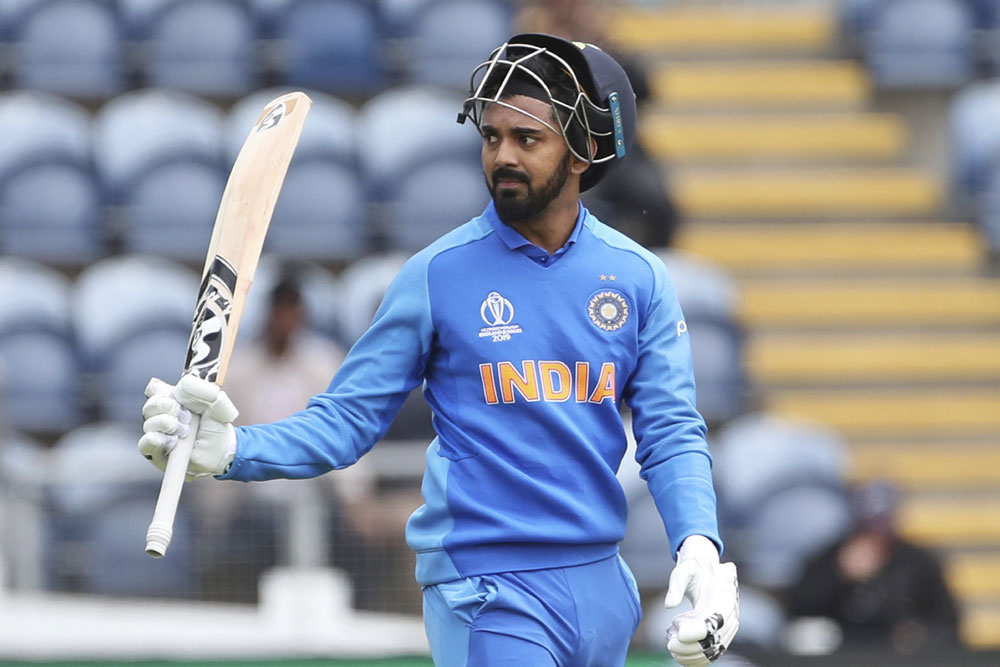 6:27 PM IST: Fifty for MS Dhoni in 40 balls with a four off the first ball of the 37th over. He follows it up with a six, and the ball disappeared. He is ready for the tournament, and Virat Kohli should consider Dhoni retiring. 14 runs from Mosaddek Hossain's third over. KL Rahul is unbeaten on 81 off 76. IND-228/4 after 40 overs. Rahul and Dhoni added 127 runs in 92 balls.

5:22 PM IST: Vijay Shankar departs. Fails to mark a mark in his only warm-up game. He takes on the rising ball from Rubel Hossain, and ends up offering an easy catch to Bangladesh wicket-keeper Mushfiqur Rahim. FoW-102/4 (21.6 over). Shankar made two off seven. MS Dhoni is the new man for India.

4:22 PM IST: Power-play over. Five overs each for Mustafizur Rahman and Mashrafe Mortaza. India 34/1 after ten overs. Rohit Sharma and Virat Kohli unbeaten on 15 off 30 and 16 off 21 respectively. Mohammad Saifuddin, right-arm fast medium, gets his first over.

4:04 PM IST: Bangladesh continue to operate with Mustafizur Rahman and skipper Mashrafe Mortaza. Three overs each, for 1/12 and 0/3 respectively. Both the Indian batsmen survived some anxious moments with the ball doing the talking. IND-17/1 after six overs.

3:52 PM IST: Mustafizur strikes. India lose their first. Shikhar Dhawa pays the price for playing across. LBW. FoW-5/1 (2.5 over). Dhawan made one off nine. Virat Kohli is the new man. 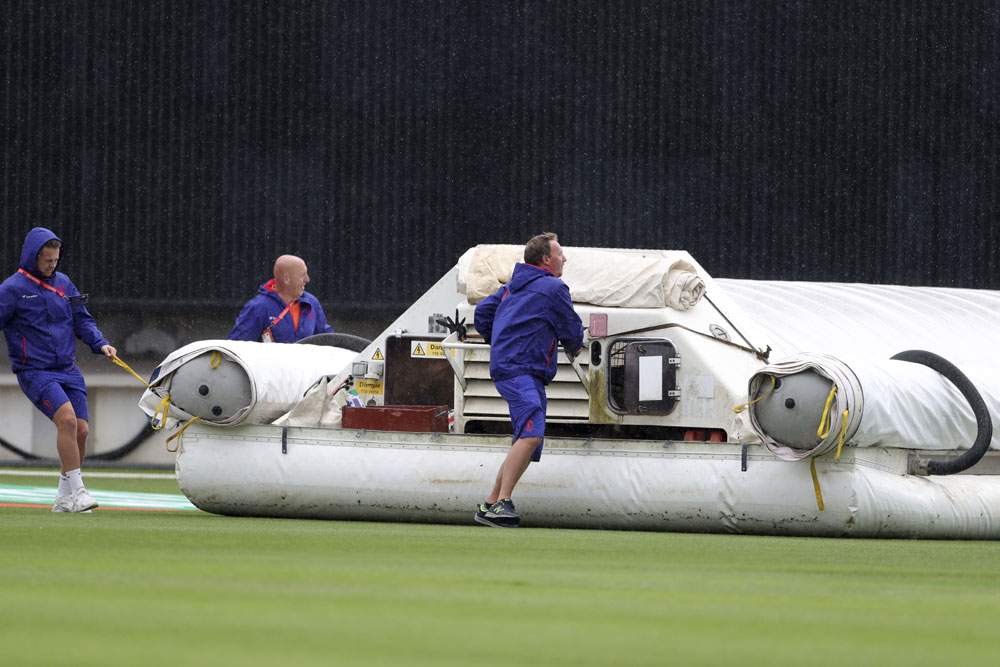 3:08 PM IST: Rohit Sharma played a sublime shot through cover off the first ball, and get off the mark with a three. Shikhar Dhawan follows it up with a single, then the rain arrived. Mustafizur Rahman conceded four runs from two runs.

2:32 PM IST: Bangladesh have won the toss and have opted to field

2:18 PM IST: If it remains overcast, as reported, then India should bat first and expose the top order to the testing spell of Mustafizur Rahman. It will be real practice for India.

1:56 PM IST: Kohli is bound to be a worried man. Kedar Jadhav and Vijay Shankar still remain uncertainties. Shankar was however seen getting some hits before the match though. Now, India's primary objective is to fix their middle-order problems.

India are the favourites and have bigger worries too. Their loss to New Zealand in the first warm-up match exposed the ugly middle-order underbelly despite the promotion of KL Rahul to bat in THAT number four position. He failed, so thus other top-order batsmen including skipper Virat Kohli and the famed opening duo of Rohit Sharma and Shikhar Dhawan.

Hardik Pandya, also promoted to number five, ahead of MS Dhoni, had a few cracks but he was far from ideal to be a middle-order fix. Dinesh Karthik also got a chance but threw away his wicket. Swordsman Ravindra Jadeja scored a fifty to salvage India's score.

Under a slightly favourable condition, the Kiwi quicks showed how dangerous they can be and how vulnerable the Indian batting line-up is. The absence of Kedar Jadhav and Vijay Shankar, through injuries, made matters more complicated for India.