Ravichandran Ashwin was spotted trying out former Sri Lankan captain Sanath Jayasuriya's bowling action during nets session under lights ahead of the Day-Night Test match between India and Bangladesh at Eden Gardens, Kolkata 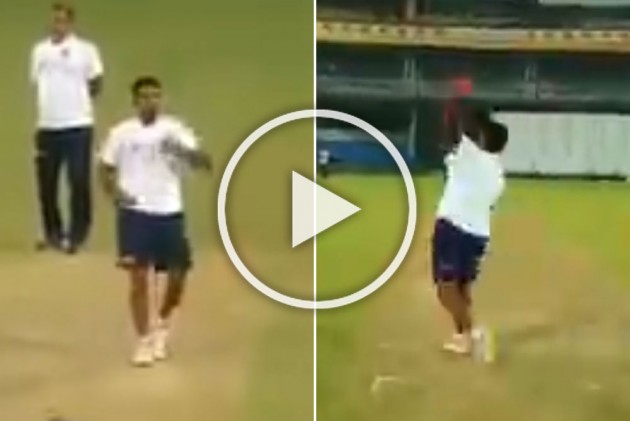 India's first-ever Day-Night Test is inching closer and the players are trying everything to ensure that they adapt as much as possible to the new conditions that come with the change in the colour of the ball. (More Cricket News)

Leading 1-0 lead in the two-match series against Bangladesh, the Indian camp will be comfortable after they won the first Test at Indore inside three days.

Even the challenge of facing the pink ball for the first time ever doesn't seem like something that can stop India from continuing their winning streak at home. This means that the players are also having some fun at training at the Eden Gardens in Kolkata.

An example of that was when ace spinner Ravichandran Ashwin was spotted trying out former Sri Lankan captain Sanath Jayasuriya's action during nets session under lights on Sunday.

Ashwin may be a right arm bowler as opposed to Jayasuriya but the latter's unique bowling action was something that Ashwin was trying out to the amusement of those around him including bowling coach Bharat Arun, and even himself. He even dropped the ball in the middle of the run-up and burst into laughter.

Ashwin being Ashwin. Bowling with the left hand and getting it to turn.#pinkballTest pic.twitter.com/jWCdyIdtXX

Ashwin joined the fun and shared a video, with better quality.

"Alright people !! Let’s put an end to this fun you are all having with a poor quality video being circulated on the social media. Here is a good one," he wrote.

Alright people !! Let’s put an end to this fun you are all having with a poor quality video being circulated on the social media. Here is a good one.ðÂÂÂðÂÂÂðÂÂÂâÂÂ pic.twitter.com/LMZZBASTbc

The day-night match between India and Bangladesh will be played at the Eden Gardens from November 22 to 26.