ODIs remains a low priority in 2021. But for India, the series against England would be an extension of their preparations for the T20 World Cup 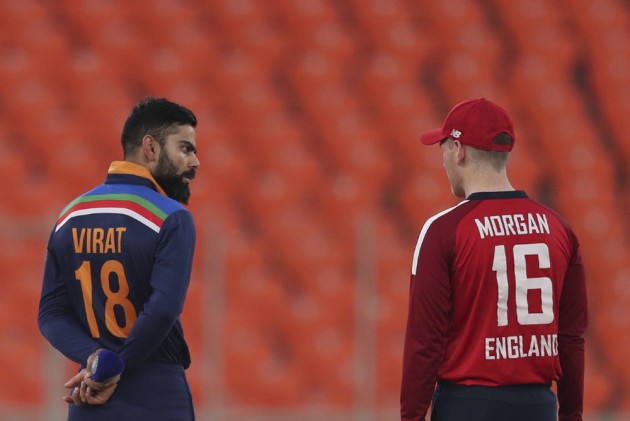 Struggling opener Shikhar Dhawan will be the focus in a spoilt-for-choice Indian team when they take on world champion England in a three-match ODI series starting in Pune on Tuesday with the visitors eyeing a positive end to their tour after Test and T20 debacles. (More Cricket News)

The series is particularly important for the 35-year-old Dhawan, who failed to make an impact in the first T20 in Ahmedabad before warming the benches the remaining two games which India won.

With the management having plenty of options in (Shubman Gill) and outside (Prithvi Shaw and Devdutt Padikkal) the squad for the opening slot, it will be a litmus test for 'Gabbar' to prove himself in the lung-opener.

He is expected to open the innings along with seasoned campaigner Rohit Sharma, who was in blistering form in the T20 series and would be keen to carry on in the same vein.

The ODI format gives Dhawan the time he needs to build his innings. With loads of experience under his belt, the Delhi batsman could well return to form come Tuesday.

For the Indian team, the series would be an extension of its preparations for the T20 World Cup later this year.

The 50-over-format, in general, remains a low priority in 2021 with no major tournaments around the corner.

Skipper Virat Kohli was back among the runs in the T20 series against England and he would look to carry the momentum into the ODIs.

It has been a while since Kohli scored a hundred in the format, his last and 43rd one coming against the West Indies (114 not out) at Port of Spain in August 2019.

He will be itching to make his good form count and end the century drought.

It is also expected that both KL Rahul, who is not likely to feature at the top of the order, and Rishabh Pant, after turning things around spectacularly since the brilliant showing Down Under, would be part of playing XI.

They would have a big role in the middle-order along with the redoubtable Hardik Pandya.

There could be a toss-up between Mumbaikars Shreyas Iyer and Suryakumar Yadav, for one spot in the playing XI. Yadav proved himself to be quite a power-hitter in the T20 series, notching up a blistering half century in his maiden international appearance.

Rookie pacer Prasidh Krishna, who has already caught the eye of Kohli, is also in the squad.

Krishna enjoyed a good Vijay Hazare Trophy campaign for Karnataka, claiming 14 wickets in seven matches at an average of 24.5.

Spinners Yuzvendra Chahal and Washington Sundar are expected to be preferred over Krunal Pandya and Kuldeep Yadav.

Also, a fit-again Pandya would be the fifth bowler, but it remains to be seen how many overs he can bowl.

On the other hand, England would also be keen to end the tour on a high after suffering defeats in the Tests (1-3) and the T20 series (2-3).

And for it to happen, skipper Eoin Morgan's role with the bat will be vital.

The likes of Jos Buttler and the swashbuckling Jason Roy will have to fire in unison and all-rounder Ben Stokes will have to step up with both the bat and ball.

England pacer Mark Wood troubled the Indian batters with his pace and in the absence of an injured Jofra Archer, he would have to shoulder greater responsibility along with Chris Jordan and the young Sam Curran.

The spin duo of Moeen Ali and Adil Rashid will have been unable to trouble the Indian batsmen and it remains to be seen whether they have any new tricks to change the dynamics. Additionally, Ali can perform the role of a pinch-hitter, if needed.

All the games at MCA Stadium, Gahunje will be played in front of empty stands as India battles a fresh surge in COVID-19 infections.