Jofra Archer claimed 3-23 as India were restricted to 124-7 in the Twenty20 series opener, leaving England a comfortable chase 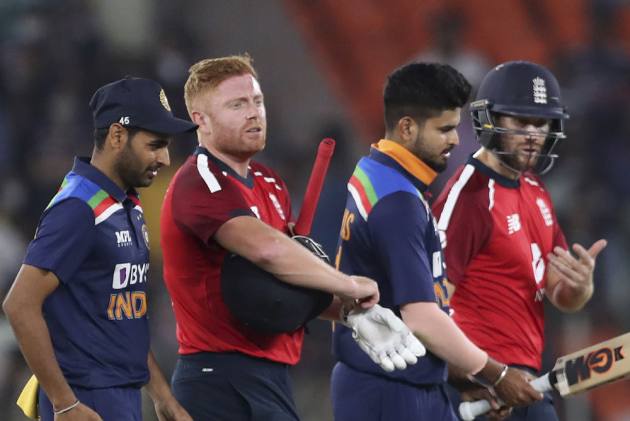 England's bowlers produced an outstanding performance to lay the platform for an emphatic eight-wicket win in the first Twenty20 International against India.

AS IT HAPPENED | SCORECARD | CRICKET NEWS

The tourists were bamboozled by spin to lose the Test series but found a pitch much more to their liking at the Narendra Modi Stadium in Ahmedabad, a venue where they twice suffered heavy defeats to go down 3-1 in the longest format.

Jofra Archer led the way with figures of 3-23 as India – who host the ICC T20 World Cup later this year – were restricted to 124-7 after being put in by visiting captain Eoin Morgan.

England had no such problems in their reply, Jason Roy smashing 49 off 32 deliveries to help wrap up victory with 27 balls to spare.

Jos Buttler contributed 28 in an opening partnership worth 72 with Roy, who hit three sixes before being trapped lbw by Washington Sundar, one of three frontline spinners selected by the hosts for the opener in a five-match series.

By contrast, England fielded a solitary slow bowler in their XI. Leg-spinner Adil Rashid (1-14) claimed the prized scalp of Virat Kohli for a duck having opened the bowling in a T20 at international level for the first time.

Archer and Mark Wood (1-20) also struck early blows as India limped along to 22-3 by the end of the batting powerplay. Shreyas Iyer led a recovery of sorts, top-scoring with 67, but their final total never appeared enough at the halfway point.

Rishabh Pant (21) thrilled the crowd with an outrageous reverse sweep off Archer that went for six, yet could only pick out Jonny Bairstow when he flicked a full delivery from Ben Stokes into the deep.

Iyer and Hardik Pandya (19) shared a half-century stand having come together at 48-4, only for the latter to become the first of two wickets in as many deliveries from the excellent Archer.

England made sure there were no complications in the chase with a powerplay onslaught from their openers, allowing Dawid Malan and Bairstow to ease them to their paltry target, the duo finishing unbeaten on 24 and 26 not out respectively.