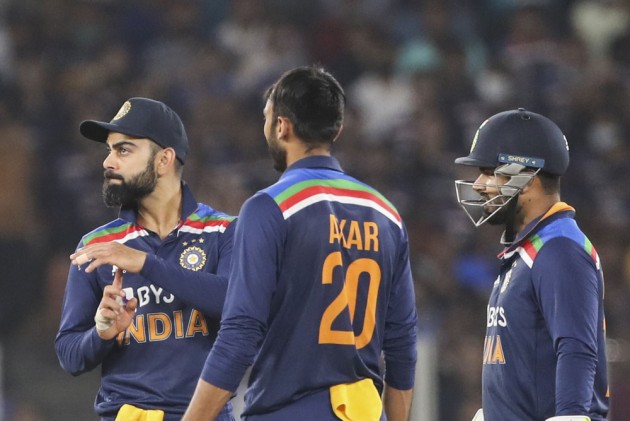 Outgunned by England on a tricky pitch, India skipper Virat Kohli admitted that they were clueless about handling the challenge posed by the conditions in the first T20 international in Ahmedabad on Friday.

AS IT HAPPENED | SCORECARD | CRICKET NEWS

Invited to bat, India managed just 124 for seven as the batsmen struggled to cope with the two-paced track at the Motera stadium. England, however, chased the target comfortably, scoring 130 for 2 in 15.3 overs.

Kohli, KL Rahul and Shikhar Dhawan fell to poor shots, something about which the Indian skipper looked concerned.

"We just weren't aware of what we had to do on that pitch, lack of execution on our shots and something we have to address," kohli said after going down by eight wickets.

"Accept your faults, come back with more intent, clarity of areas you want to hit. Wicket didn't allow you to hit the shots we wanted to."

Kohli was pleased with the determination showed by Shreyas Iyer, who hit a half-century to help India post a respectable total.

"Shreyas showed how to use the crease and ride the bounce. Below par batting performance and England made us play. We looked to try a few things, but having said that you have to accept the conditions.

"If the pitch allows you to, you can be aggressive from ball one. We didn't spend enough time assessing, Shreyas did but we had lost too many wickets to get to 150-160."

Asked if switching from Test format to the shortest format, was a reason for India's struggle, Kohli disagreed.

"That shouldn't be a factor, take pride in playing good white-ball cricket, won our last few T20 series. These five games before the World Cup, we have to try and few things, but we can't take anything lightly against England."

Happy to be on the winning side, England skipper said: "(It was a good game) Particularly in the bowling department, the wicket was better for us than we expected, we didn't have to go to plan B and C very often, which is always a good sign."

Morgan was quick to point out the impact Roy has on team.

"Within the side there's huge competition, outside the squad, too. Huge support for players who score runs and does well, and when Jason does it gees the boys up."

Like Kohli, the England captain stressed that there was no Test hangover on players.

"It is completely different format, very distinct. In big series, like the Ashes, we've come out the back and learned from it," Morgan signed off.