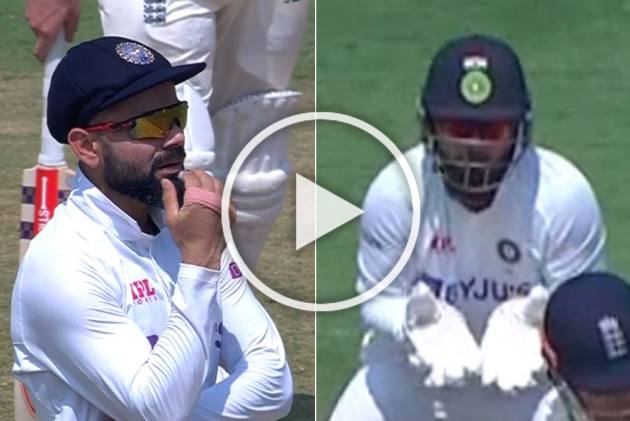 After their emphatic series win in Australia, India ran into Joe Root & Co in Chennai for the first Test series against England, and they toiled hard. At the close of play on Day 1, England were 263/3 (89.3) with Root unbeaten on 128 off 197 balls.

England skipper looked in complete control and added a 200-run stand with Dominic Sibley, who made a defiant 87 off 286. That stand, broken at the fag end of the day, sure did the damage.

As India tried to break the Sible-Root stand, wicketkeeper Rishabh Pant was at his oratory best, cheering up his teammates with a veritable live feed of what's going on and what to expect from the English pair.

And his relentless effort earned plaudits from fans with many repeating the 23-year-old's words on social media, albeit in written format.

How do these batsmen spend hours with Rishabh Pant chattering away just behind them? ssssaabbbbbaaaaa...

It's been some day listening to Rishabh Pant on the stump mic. Some of the recent snippets from his day on airðÂÂÂÂÂÂ

There should be a clean feed with just Rishabh Pant talking, almost like a package on the broadcaster's platform. He is terrific entertainer both in front and behind the stumps #cricket #IndvEng

Rishabh Pant is a cricket fan who just happened to be on the pitch.

He also focussed on individual players, using sweet nicknames. At one time, he even said a couple using Washington Sundar's name. He said, "mera naam hai Washington, mereko jana hai DC," while the spinner was on the attack.

Pant even sounded a leader when he told "bhagna padega Puj" to Cheteshwar Pujara after the fielder failed to stop a boundary.

Pant, billed as the heir-apparent to legendary Mahendra Singh Dhoni, warmed the benches as India lost the Border-Gavaskar Trophy series opener against Australia in Adelaide. Then, he played crucial knocks, including an unbeaten 89 in the series-deciding Brisbane, to help India fought back from 1-0 and win 2-1.