Shreyas Iyer's injury has once again brought Suryakumar Yadav in focus and his ODI debut, after a blockbuster T20 first outing 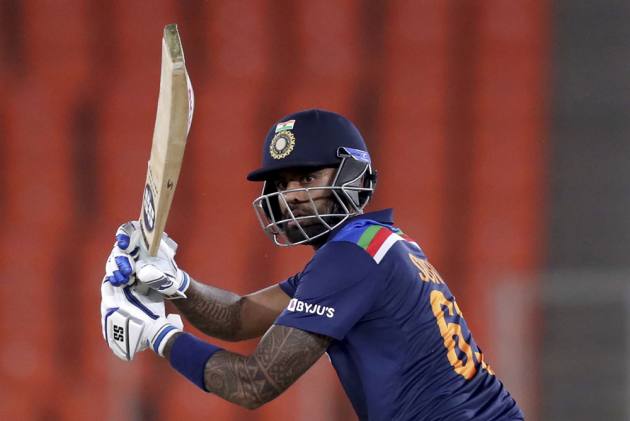 The immensely talented Suryakumar Yadav is likely to get a chance to showcase his '360 degree' hitting skills when a rampaging Indian team takes on a rather clueless England, aiming to seal another series victory in the second ODI in Pune on Friday. (More Cricket News)

Shreyas Iyer's dislocated shoulder has once again brought Yadav in focus and his ODI debut, after a blockbuster T20 first outing, looks imminent after an all-round show by the hosts ensured an easy victory in the first game.

Iyer has been one of India's most prolific 50-over batsman before the COVID-19 enforced lockdown but such is the team's strength that a debutant looks more formidable for a world champion opposition, who are no less menacing but seem utterly confused at this point.

Being spoilt for choices is always a good headache to have for the think-tank and skipper Virat Kohli will be more pleased than anyone else.

Kohli has not had Ravindra Jadeja's services for close to three months but neither Axar Patel in Tests, and now Krunal Pandya in the ODIs, have let the team miss their maverick from Rajkot.

Prasidh Krishna, already a household name due to IPL, looked completely at home on his ODI debut, hurrying batsmen for pace in the absence of Jasprit Bumrah and Mohammed Shami.

"He has a great sense of the game, it's not just his skill but how he understands and reads the game. He is a very keen learner and he is, like I said, very brave and comes in with a lot of aggression," said batsman K L Rahul ahead of the match.

And come to think of it, once Jadeja and Bumrah are back, a Krunal or Krishna will either cool their heels in the dug-out or even worse, not find a place in the squad, which is a testimony to India's unimaginable depth of talent pool.

The biggest positive during the opening game was Shikhar Dhawan's return to form with a match-winning 98. He was under pressure after being benched for a large part of the T20 series.

The elegant southpaw would be raring to go one more time.

Rohit Sharma had sustained a blow to his elbow during the first match but is expected to be fit in time for the second game.

In case India want to give Rohit a short break, then Shubman Gill can open alongside Dhawan with KL Rahul coming in at his usual middle order slot.

However, as per sources, Rohut is keen to get cracking as it's not very serious.

It is expected that Pant would play purely as a batsman and Rahul would continue to keep wickets.

The pace trio of experienced Bhuvneshwar Kumar, Prasidh Krishana and the ever-improving Shardul Thakur took nine of the 10 wickets and would be keen to rock the England batting line-up again.

The best part was how they came back after first 15 overs of mayhem by Jason Roy and Jonny Bairstow.

Shardul has been continuously playing and it won't be a bad option to try out T Natarajan or Mohammed Siraj for a bit of variation.

"One of our sweetest victories in recent past. We haven’t won many good games in ODIs. I am, really a proud man right now," skipper Kohli had said after the first match as he sounded pleased with the team’s effort.

Meanwhile, England will look to level the series and stay alive in the contest.

England have a lot to ponder on and injuries to skipper Eoin Morgan and batsman Sam Billings, while fielding, in the lung-opener have only added to their woes. Morgan has been ruled out of the remaining matches while Billings will miss Friday's game.

All-rounder Ben Stokes was firm in his belief that England do not have too many reasons to worry despite the continuing disappointments.

"We've been formidable in the white ball format for over a number of years. Just because we lost the T20 series doesn't mean we need to start changing things around," he said on match eve.

The two would be looking to put up another fine show and carry forward the aggressive brand of cricket, which was the cornerstone of the 2019 World Cup triumph.

However, their middle order hasn't performed up to its potential and the likes of all-rounder Ben Stokes, Jos Buttler and Moeen Ali faltered with the bat.

If England have to put a big total or chase a score, the trio needs to fire in unison.

Their key spinners Adil Rashid and Moeen Ali haven't been able to trouble the Indian batters and both went wicket-less in the opening game.

They will have to step up and deliver and along with Tom Curran, who will need to compliment his brother Sam and pace spearhead Mark Wood, who troubled the batters with his speed.

Come Friday, it remains to be seen whether India are able to add "another sweetest victory" or if the visitors spoil their party.