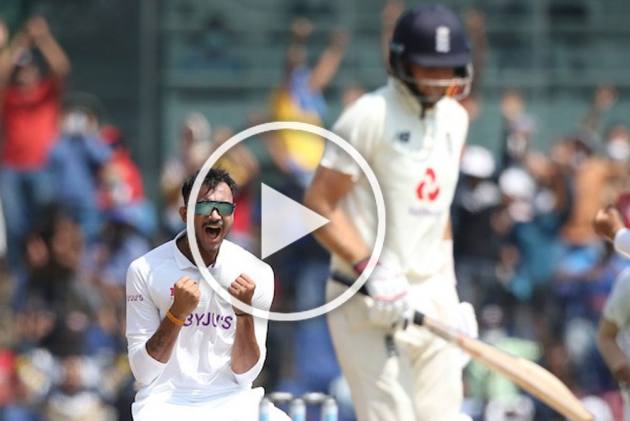 After posting 329 runs in their first innings, India left England tottering at 39/4 at Lunch on Day 2 of the second Test in Chennai. And the debutant Axar Patel got the big wicket of Joe Root as England faced a trial by spin at spitting Chepauk.

Ishant Sharma gave India a perfect start by trapping opener Rory Burns in the first over, then local lad Ravichandran Ashwin had another opener Dominic Sibley caught by Virat Kohli to reduce England to 16/2 in the 8th over.

Patel then had skipper Root, who scored a double century in the first Test, caught by Ashwin in the 11th over for nine runs. Watch it here:

Spectacular start! Right in his second over, Axar Patel picks up his maiden test wicket as he gets Joe Root out. A very important dismissal for #TeamIndia. #INDvsENG #AxarPatel @akshar2026 @BCCI @JayShah @GCAMotera pic.twitter.com/XMgLVRtsfM

And in the last over before Lunch, Ashwin removed Dan Lawrence or nine runs, caught by Shubman Gill.

Earlier, India were bowled out for 329 in their first innings. Resuming the day at 300/6, India batted for 7.5 overs with Rishabh Pant scoring an unbeaten 58 off 77 balls. With the tail not able to contribute much, the southpaw eventually ran out of partners.

England won the first Test at the same venue by 227 runs to take a 1-0 lead in the four-match series.