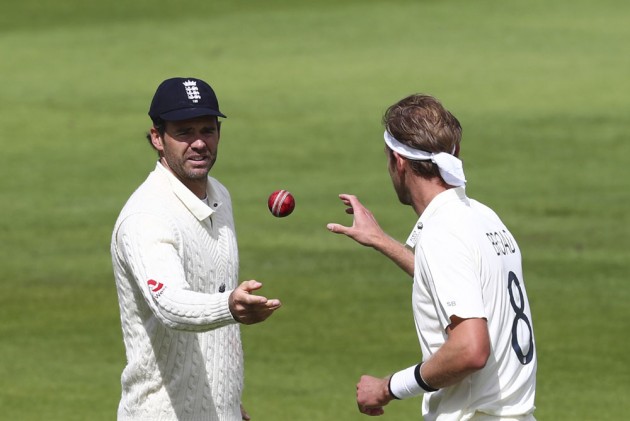 England skipper Joe Root on Friday announced a 12-man squad for the second Test against India with four changes, resting veteran pacer James Anderson and bringing back Stuart Broad in his place.

Another change is replacing offie Dom Bess, who did a decent job in the first Test, with the experienced Moeen Ali.

Ben Foakes also is included as a wicketkeeper-batsman in place of Jos Buttler as expected with the latter returning home after the first Test.

Bowling all-rounder Chris Woakes and rookie pacer Olly Stone will be vying for a final spot in the playing eleven.

"We are going to make four changes. Jimmy, Jofra (injured), Jos, Dom Bess are out with Foakes, Ali, Stone, Broad and Woakes coming in to the XII," Root said in a virtual media conference on the eve of the second Test.

England lead the four match series 1-0 after defeating India by a massive 227 runs in the first Test.

The touring party also received a setback after their strike parcer Jofra Archer was ruled out of the second Test with an elbow injury.

"Of course it is a slight setback but the good news is that it looks like he should be able to get himself fit and ready for the game.

"So as long as he uses the next couple of weeks wisely and looks after he should be fully fit ready to go," Root said about Archer's unavailability.

Bess, who picked the prized scalp of Virat Kohli en route to a five-wicket match haul, misses out after a slump in form in the second innings with Ali set to play his first Test since August 2019.

"Yeah, it wasn't an easy decision that Dom's contributed well and and had a real impact. With him missing out, the message for him moving forward is to keep working at that consistency of his game, deliver that skill time and time again," Root said about the offspinner's exclusion.

"The contributions he made was fantastic. He is very young. He's very much at the start of this, it doesn't mean that you get a big push back down the pecking order.

"It gives him an opportunity to take a step out of Test cricket, the harshest environment, especially these conditions especially against a team that plays spin so well. Take a stock and work on his game."