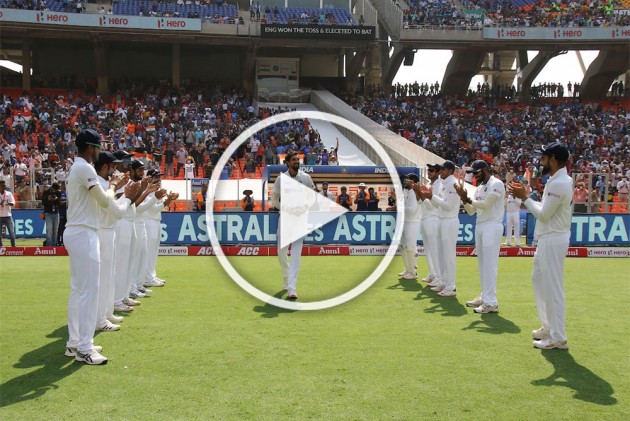 India's veteran fast bowler Ishant Sharma was on Wednesday accorded a guard of honour by his teammates after being felicitated by President Ram Nath Kovind and Home Minister Amit Shah ahead of his landmark 100th Test match in Ahmedabad.

The 32-year-old Ishant is only the second Indian fast bowler after former captain Kapil Dev to play 100 Test matches.

Before the start of the day-night third Test against England, the pacer received a memento from President Kovind while Shah handed him a commemorative 100th Test cap at the Narendra Modi Stadium here.

As he made his way into the ground after England opted to bat, captain Virat Kohli's men lined up to honour his longevity and service to Indian cricket.

Guard of honour for Ishant in his 100th test#IshantSharma#INDvsENG pic.twitter.com/kThGjJloum

"@ImIshant was felicitated by the Honourable President of India Shri Ram Nath Kovind & Honourable Home Minister of India Shri Amit Shah before the start of play here in Ahmedabad," the BCCI tweeted.

Besides the President and home minister, also present during the inauguration of the world's largest cricket stadium were sports minister Kiren Rijiju and BCCI secretary Jay Shah.

In his landmark game, Ishant provided the home team a perfect start as he removed Dominic Sibley in the third over.

Though he has had many memorable moments in his career so far that has nearly spanned a decade and a half, Ishant struggled to name one while speaking to reporters ahead of the game.

"If your career is 14 years long and you are still playing, you cannot name just one highlight. It is difficult to pinpoint just one highlight, every sportsperson has the graph going up and down," Ishant said.

During the first Test against England earlier this month in Chennai, Ishant became the sixth Indian and third pacer from the country to take 300 wickets in Test cricket, joining legendary former captains Kapil and Anil Kumble.

Ishant, who has 11 five-wicket hauls and picked up 10 wickets in a match once, made his Test debut back in 2007 against Bangladesh.

Prior to the start of the match, Ishant was hailed by the likes of Kohli, Sachin Tendulkar, Virender Sehwag and Ashish Nehra.