IND Vs ENG: What's In Store For Kuldeep Yadav After Another Test Exclusion?

On a day when both Shahbaz Nadeem and Washington Sundar looked completely ineffective on a docile track, India certainly missed an attacking option in Kuldeep Yadav 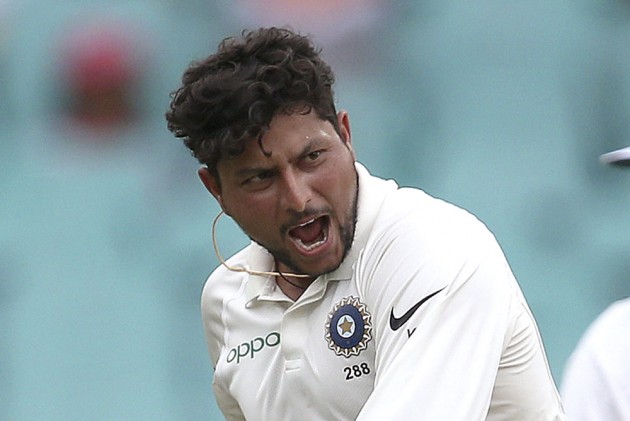 In his last Test match at Sydney back in 2019, Kuldeep got five-for which had prompted head coach Ravi Shastri to call him India's first choice overseas spinner.

But since then, India have played 11 Tests including the ongoing series opener against England but Kuldeep's long wait for a comeback continues.

In Australia, Washington Sundar leapt from behind and got his Test cap after being taken as a net bowler.

Ditto for Shahbaz Nadeem, who was in the reserves for the first two Tests but was inducted into the eleven in the Eleventh Hour after Axar Patel sustained a knee injury.

On a day when both Nadeem and Washington looked completely ineffective on a docile track, India certainly missed an attacking option in Kuldeep whose wrist spin could have taken the surface out of equation.

The team management in its favour could argue that Kuldeep being a left arm wrist spinner would have got his stock delivery to come into the right hander and then along with Washington and Ashwin would have made the spin attack uni-dimensional.

However, the question of playing Washington based on his Brisbane performance is raising a few eyebrows.

Skipper Virat Kohli while answering a PTI query on the eve of the game said that "bowlers with batting ability will be preferred" and that's gave Washington the edge.

A counter logic is why do we need batting after No 6 on Indian tracks considering that Ravichandran Ashwin at No 7 is a more than a decent batsman with a reputation of saving a Test match in adverse circumstances.

"By that logic you will have to play Shardul Thakur ahead of Ishant Sharma. Some clarity would help. There are spinners who are being leapfrogged ahead of Kuldeep. So what is Kuldeep?," a former India Test player said.

"Is he an overseas spinner or a bowler only to be used in India because prolonged absence is not doing him any good," the player added.

On the eve of the series opener, Kohli said that Kuldeep had trained really well on his skills in Australia and could be used during the home series.

But then on Friday, India very interestingly included leg spinner Rahul Chahar in the main squad from the standbys.

The way bowlers have jumped the queue in the past two years to start in the playing eleven in the traditional format, there could also be a toss-up between Kuldeep and Chahar later in the series.

After day one in Chennai, India pacer Jasprit Bumrah was asked if Kuldeep would have been a better choice in the prevailing conditions.

"There could be a lot of ifs and buts but we back every individual in this team. In hindsight, you can say this or that after the game but there is still a job to be done, we are focussing on backing our players. Later on after the game we can discuss about it," he said.