Indian spinners, led by Ravindra Jadeja, put up one of their most persevering performances in recent times but Mumbai-born Ajaz Patel and Karnataka-born Rachin Ravindra defied odds to help New Zealand share the spoils in the first Test. 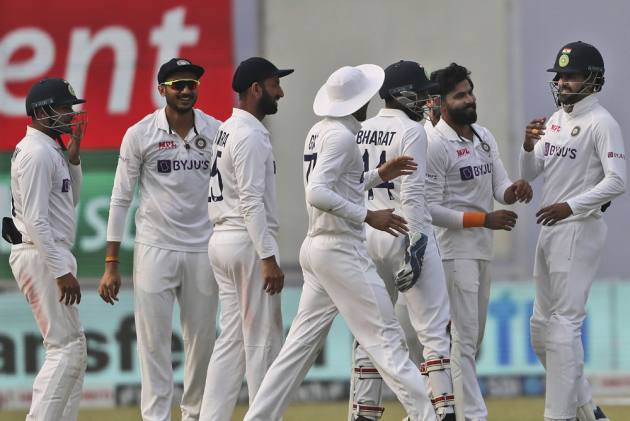 Two Indian-born cricketers, Ajaz Patel and Rachin Ravindra, showed remarkable resilience under fading light and on a deteriorating track to defy India's famous spinners, eking out a thrilling draw for New Zealand in the opening Test in Kanpur on Monday.

Indian spinners, led by Ravindra Jadeja, put up one of their most persevering performances in recent times but Mumbai-born Patel (2 off 23 balls) and Karnataka-born Ravindra (18 not out off 91 balls) consumed 8.4 overs after the fall of the ninth wicket to keep New Zealand on even keel in the two-match series.

A lot of credit should also go to night-watchman Will Somerville (36 off 110 balls), who played the entire fifth morning and to first raise visions of the improbable draw.

A match lasting five days on an Indian spin-friendly track impressed newly-appointed national head coach Rahul Dravid, who announced Rs 35,000 as a token of appreciation for the ground staff.

"We were bowling in good areas, we knew we had time but light was always going to come into play in the last session. It happened every day of the match," senior India off-spinner Ravichandran Ashwin said after the exhausting day.

A victory target of 284 was always out of question but the gutsy New Zealanders didn't lose any wicket in the first session of the last morning before the Indian spinners, who had saved their best for the last, finally showed their skills but couldn't end on a winning note.

The result at Green Park is the first time that New Zealand has gone 10 Test matches undefeated (eight wins, two draws) with the current streak starting against India at the start of 2020.

The last half an hour was a thriller with umpires Nitin Menon and Virender Sharma checking light and Ravindra appreciating Patel for every copybook forward defensive stroke.

There was low bounce for sure but the slow turn made it easy to negotiate and also the failure of the two senior pacers put immense pressure on the spin troika who still took 17 of the 19 Kiwi wickets to fall. But they couldn't take the all-important final one.

It was one of India's most hard-fought Test matches at home in recent times and no one would grudge the 'Good Men' from New Zealand again showing their wares in adversity.

The only thing that went in favour of India was the low bounce as defending for very long period wasn't an option.

After this draw, there are some probing questions for the team going into the next Test.

There will be serious question marks regarding stand-in captain Ajinkya Rahane's place in the playing eleven with skipper Virat Kohli coming back in the next game.

Veteran pacer Ishant Sharma (22 wicket-less overs in match) is looking completely off-colour since England and his place in the eleven ought to be questioned.

Tom Latham (52 off 146 balls) scored his second fifty and, along with Somerville, became the key man to in taking the game deep into the fifth day.

In the final context, even Kane Williamson's (24 off 112 balls) would mean a lot and so would Tim Blundell and Kyle Jamieson playing 30-odd balls each.

These were little contributions that mattered and in the end, a little bit of luck also went their way.

The first session was the key when Somerville confidently negotiated Umesh and Ishant to set the tone during the 76-run stand.

The second session certainly belonged to India as Umesh Yadav (1/34 in 12 overs) removed the night-watchman with a short ball immediately after resumption. It was Shubman Gill who took a fine catch diving forward at long leg boundary.

Williamson looked way more confident that his first innings effort as he hit a cover drive off Ishant, who was completely off-colour on the day while Latham also played his defensive game pretty well.

However, the low bounce did him in as he dragged one back during the post lunch. With that scalp, Ashwin in his 80th Test, crossed Harbhajan Singh (417 in 103 games) to become the third highest wicket-taker for India in the five-day format.

"I would like to congratulate Ashwin on his milestone. Well done and hope he wins many more matches for India," Harbhajan told PTI.

"I never believed in comparisons. We played our best cricket in different times, against different opposition. I had done my best for the country back then and ditto for Ashwin, he did his best now," the former India spinner said.

But this will be one milestone that he won't enjoy much as the team failed to win.