With debutant Shreyas Iyer making all the right noises in Kanpur, India will find it almost impossible to drop the Mumbaikar for the second IND vs NZ Test at Wankhede Stadium. But Virat Kohli needs a spot in the XI. So who makes way? 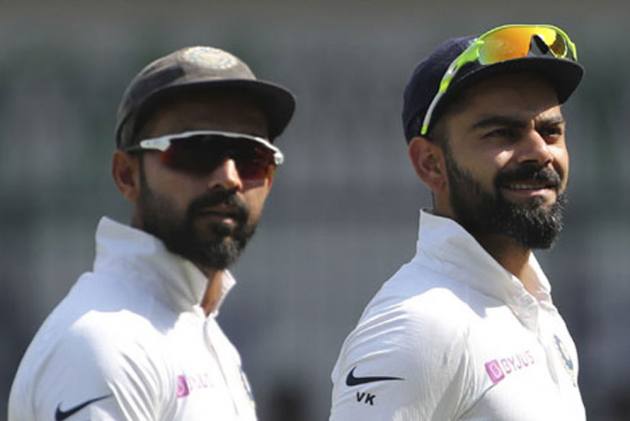 The first Test against New Zealand in Kanpur is only four days old, but the India camp is already busy working out possible playing XIs for the next match in Mumbai. With the imminent return of skipper Virat Kohli, India are certain to field a different XI when they take the field at Wankhede Stadium on December 23. (More Cricket News)

And there's enough hint that India will sacrifice either Cheteshwar Pujara or Ajinkya Rahane to accommodate the skipper in the playing XI. Pujara and Rahane have been struggling to score runs, In contrast, debutant Shreyas Iyer made a resounding start to his Test career. The axe could also fall on Mayank Agarwal, the opener.

On Sunday, as India once again relied on Iyer to fight back against New Zealand at Green Park, batting coach Vikram Rathour said that the selectors "understand" fully that Pujara and Rahane are now living on borrowed time. But the former opener couldn't give a definitive answer as to who would sit out in the next match.

"Of course, you want the top-order to contribute but cricketers (Pujara and Rahane) you mentioned they have played 80 (79 for Rahane) and 90 Tests (91 Test for Pujara)," PTI quoted Rathour as saying. "To play that many games, they must have done well for us."

In Virat Kohli's absence, Rahane is leading India in the first Test, while Pujara has been named his deputy. Rathour tried his best to defend the 2021 Test average of below 20 by Rahane (19.57) and 30.42 by Pujara.

But what's the kind of long rope that one gives a senior player, who has been a past performer? Is it 15 or 20 Tests? The former Punjab opener, who played six Tests during the 1996-97 season, felt that it can't be quantified.

"I don't think you can put a number to that. It really depends on situation the team is in and what the team is required to do," he sidestepped the question.

The next question was even more straightforward: whom do you drop when Virat Kohli takes his slot back in the Mumbai game?

Can he, at the least, say with a degree of certainty that Iyer, after his dream debut, won't be dropped in the next game? There had been an instance when Karun Nair was left to cool his heels just after scoring a triple ton as an injured Rahane was making a comeback.

"Once we land in Mumbai, we will take that call, what our playing XI is going to be," he repeated.

It is going to be a tightrope walk for the Indian team management when its best batter comes back in the next game.

Even Pujara and Rahane know very well that one among the two could get the axe at least for the game although they are both expected to be selected for South Africa Tests if the tour goes on.

The problem in accommodating Pujara and Rahane is that the two juniors -- Shubman Gill and Iyer -- who would have been easily disposable after a singular failure have scored runs and done that with a lot of authority on a tacky, if not, unplayable surface.

One thing is for sure that Mayank Agarwal (13 and 17) will have to sit out in Mumbai after his twin failures and therein lies the problem.

There are a few options by which one can still slot Cheteshwar Pujara and Ajinkya Rahane for the next game. None are convincing but it's a way to show respect to two quality players, who deserve one more chance.

One is to ask Pujara to open the batting, which looks unlikely going by his confidence level at the moment.

The second option will be to look at either Wriddhiman Saha opening the innings alongside Gill and Iyer coming in at No. 6 instead of the No 5 that he batted in this game. This is provided Saha is completely fit from his stiff neck issue, which troubled him in this game.

In case Saha doesn't get fit, then Srikar Bharat, who has been a red ball opener with a triple hundred in first-class cricket, could be tried.

The third option is playing with four bowlers and expecting Iyer to at least give 10 overs of leg spin along with three other spinners while dropping one of the pacers.

And then there is also a fourth option: drop one among Pujara and Rahane straightaway, but in Indian cricket, the system of dealing with star players is slightly different compared to England and Australia.