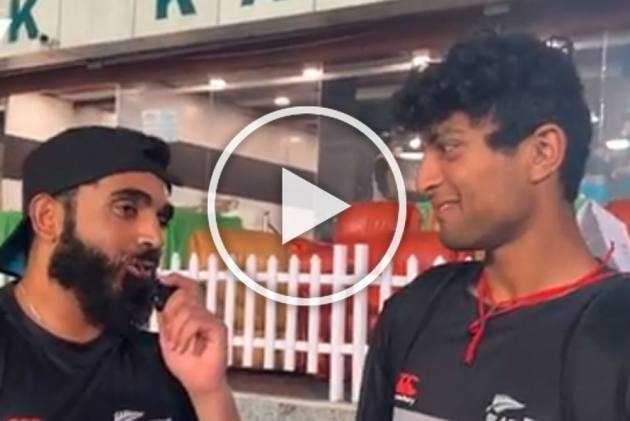 New Zealand's Indian-origin spinner Rachin Ravindra, who played a pivotal role in helping his side draw the first Test against India, said he was quite nervous about how the game would pan out as far as his bowling was concerned. (More Cricket News)

The 22-year-old Ravindra, in the company of Indian-born Ajaz Patel (2 off 23 balls), held a 91-ball vigil that yielded 18 runs for him to save the match for his side which was nine down in pursuit of 284 on the final day in Kanpur.

Patel, who was born in Mumbai, played for the first time in the country of his birth. He also picked up three wickets in the game even though Ravindra went wicket-less.

The 33-year-old Patel interviewed Ravindra for the New Zealand cricket team's official Twitter handle and recalled his own Test debut.

"We did it together bro" - Rachin Ravindra and @AjazP share a special moment after play at Green Park. #INDvNZ pic.twitter.com/n2968pHDsf

"I remember my my first Test match, I was really nervous, and my hands were shaking when I first got the ball. How was it for you?" Patel asked.

Ravindra candidly admitted to having nerves of his own.

"I felt a bit nervous bowling wise. We were about four down in first innings when I was next, so definitely felt a few butterflies (that time), but I think after a few balls, I did what I do. Luckily it ended up okay," said Wellington-based player.

Ravindra has already a lot of attention for his Indian roots and his first name which is inspired by Indian greats Sachin Tendulkar and Rahul Dravid. The youngster said he enjoyed playing in front of Indian fans.

"Being able to play in India in front of crazy fans. Glad to have done that. My mum and dad have been such big influences on my career. I am sure that they are proud," said Ravindra.

"We did it together bro," he signed off, sharing a smile with Patel.

The second and final Test of the ongoing series will be played in Mumbai from December 3.