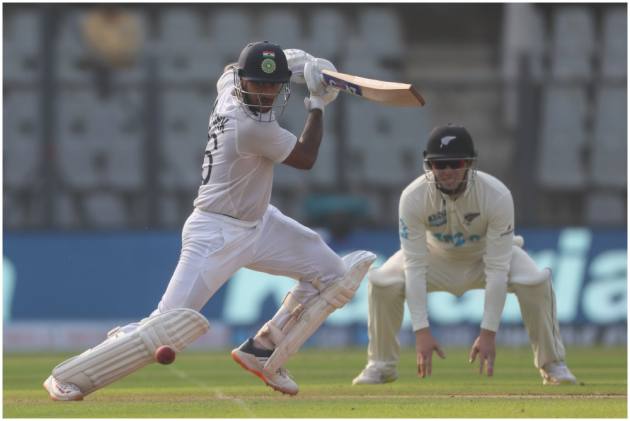 In and out of the squad in recent times, India’s Mayank Agarwal credited head coach Rahul Dravid and former skipper Sunil Gavaskar for success after the opener scored an unbeaten 120 under pressure on Day 1 of the second Test match in Mumbai against New Zealand on Friday. (More Cricket News)

While Dravid’s words of wisdom helped Mayank to stay focussed and control what’s in his domain, Mayank watched Gavaskar’s batting videos to slightly bring a change in his batting stance. At the end of the day's play. India were 221/4 after a delayed start due to wet outfield because of the rain the previous day.

“When I was picked, Rahul bhai spoke to me. He asked me to control what is in my hands and said, ‘go out there and give it your best’,” Agarwal said at the end of the day's play.

“He had told me ‘When you get set, make it big’. I am happy to have capitalised on the start that I had. But that message was very clear from Rahul bhai, that I should make it count,” added the swashbuckling right-hander.

Back in the side after a break, India captain Virat Kohli made several changes in the playing XI that included three injury updates just before the toss. Kohli came in place of Ajinkya Rahane while Jayant Yadav and Mohammad Siraj replaced Ravidra Jadeja and Ishant Sharma respectively.

The India opener also elaborated how he is trying to ape the iconic former India captain's side-on stance. “He told me that I should consider keeping the bat a bit low initially in my innings. I have a tendency to hold it high,” Agarwal continued.

“I couldn’t make that adjustment in this short period of time. When he was saying, I noticed his shoulder position and basically picked up that I need to be more side on,” added Agarwal, who has been retained by Punjab Kings for IPL 2022.

India hasn't still reached a commanding score and Agarwal reckoned that the first session on Saturday will be crucial. “How we start is crucial, the focus is that. The first session we want to play it out, the wicket is going to get harder and harder to bat on,” he signed off.