Virat Kohli was dismissed for a duck in controversial circumstances on Day 1 of second India vs New Zealand Test match in Mumbai on Friday. This was his fourth duck in 2021 and fans are blaming the umpire! 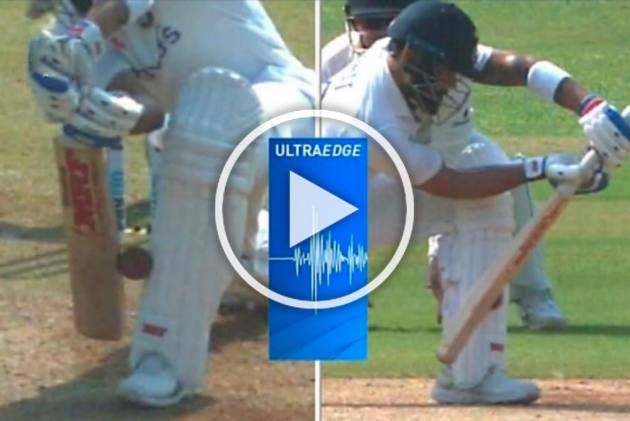 India captain Virat Kohli got out for a four-ball duck on Day 1 of the second Test against New Zealand at Wankhede Stadium, Mumbai Friday. The decision, an LBW off Ajaz Patel's bowling, became a massive talking point with fans questioning the decision made by TV umpire Virender Sharma.

As replays showed, the question was -- bat first or pad first? There was a spike but not sure of the source. A livid Kohli then had a word with leg umpire Nitin Menon. And fans and pundits have their say:

What was a little concerning was that the third umpire was rattled. He went back to the on field umpire without checking ball tracking #INDvNZ

Inconclusive evidence shouldn’t mask the quality of the decision…or the lack of it. #IndvNZ

Kohli’s lbw was a contentious decision. Unfortunately for him, Umpire’s call stays

WATCH - Was Virat Kohli OUT or NOT OUT ? You decide.

That was bat first in my opinion. And I understand the 'conclusive evidence' part. But I think this was an instance where common sense should have prevailed. But as they say common sense is not so common. Feel for Virat Kohli. #Unlucky #INDvNZ

Virat Kohli became the fourth India captain to get out for a duck four times in a calendar year after Bishan Bedi in 1976, Kapil Dev in 1983, MS Dhoni in 2011.

This was also his 10th duck as captain in Test. Only Kiwi Stephen Fleming (13) has more ducks as captain. Former South Africa captain Graeme Smith also has ten ducks.

Earlier, on his comeback, Virat Kohli won the toss and opted to bat first after a delayed start. Mayank Agarwal and Shubman Gill got India off to a good start, adding 80 runs for the opening wicket.