Read Day 5 report of ICC World Test Championship final between India and New Zealand. The Kiwis edged ahead after removing both the Indian opener 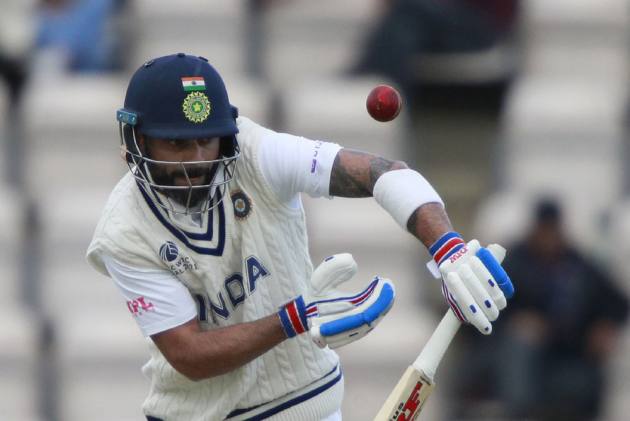 Mohammed Shami's incisive swing bowling brought India back in the contest but New Zealand nosed ahead by removing both the openers as the World Test Championship final headed towards an engrossing 'sixth' and final day.

If Shami brought India back with a four-wicket haul that helped the side dismiss New Zealand for 249, Rohit Sharma (30) after all the hardwork, made an error in judgement trying to leave a Tim Southee (2/17) in-dipper which trapped him plumb in-front.

With Shubman Gill (8) also back in the hut, India finished the fifth day at 64 for 2 with a lead of 32 runs, having erased a 32-run deficit.

With a full day's play expected, India would like to bat at least a session and half to put themselves in safe position before giving New Zealand 50 odd overs and 200 plus target if they want to enforce a result.

A draw looks more of a practical possibility due to all the time that has been lost due to inclement weather but a superb batting effort from skipper Virat Kohli (8 batting) and Cheteshwar Pujara (12 batting) or an inexplicable batting collapse like Adelaide could certainly make things interesting during the business end of the marquee clash.

But the fifth day's play certainly belonged to the most talented Indian swing bowler in contemporary times --Shami.

His artistry was on full display as he singlehandedly brought India back in the match during the first session at a time when New Zealand had control over the proceedings.

The 32-run lead that they got was largely due to efforts of Kyle Jamieson (21) and Tim Southee (30), who threw their bats around to put the pressure back on India, going into the final session of the day.

Shami after a mesmerising morning spell, got a couple of more wickets in the post-lunch session. He dismissed Colin de Grandhomme with a delivery that angled in and Jamieson with a bouncer.

India's senior-most player Ishant Sharma (25-9-48-3) denied half-century to a dogged skipper Kane Williamson (49) with a classic Test match dismissal -- a delivery rearing up and shaping out which was edged to Virat Kohli at third slip.

Sensing that mere survival would spell doom, New Zealand scored 114 runs in the post lunch session even as Shami and Ishant remained standout performer bowling their hearts out.

Such was Shami's domination in the first session that Williamson managed only seven runs in an entire session of play.

Ross Taylor (11) was dismissed as Shami reaped the rewards for finding the fuller "English" length which enticed the batsman to go for a drive.

Ishant then had the normally dependable Henry Nicholls (7), who went for a 'fishing expedition' when the lanky speedster pushed his length-fuller by a yard and the edge at second slip was taken by Rohit Sharma.

BJ Watling (1), in his last Test, got a ball that would have put the best in the business in trouble.

Shami, who by then had started bossing the batsmen, bowled one that looked like shaping in but held its line after pitching, clipping the off-bail in the process. From 117 for 2, New Zealand were reeling at 135 for 5 in no time.

Apart from the immaculate length that he hit time and again, the other hallmark of Shami's spell was how he used the crease. When he intended to bowl outswing, he would come closer to the stumps and would move the ball.

However, the disappointment for India was Jasprit Bumrah (0/57), who bowled short and wide which former England captain Nasser Hussain termed "pretty balls" that don't yield results.

He didn't look to make the batsmen play and Williamson was seen doing a "Cheteshwar Pujara", leaving delivery after delivery.

In hindsight, Williamson's defensive approach did put pressure on the other batters as they tried to up the ante in the final session.

His first four of the morning came in the 20th over of the day (69th for the day), a clip off Bumrah to the mid-wicket boundary.

What Shami and Ishant did was to hit the six-metre length (good length) which did the trick during both sessions.