The ball, as if it has got its own mind, snuck between the boundary padding amid the onslaught from Indian batsmen during the second day's play of the first Test match of the 2019 Freedom Series at Visakhapatnam, but only to get comb out by the South African fielders 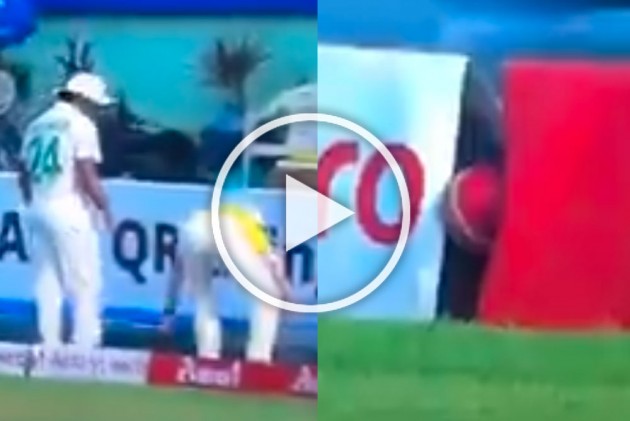 India have so far dominated the first Test match of the Freedom Series against South Africa at Visakhapatnam with the ball bearing brunt of the batsmen. Openers Mayank Agarwal (215) and Rohit Sharma (176) stitched a 317-run stand to help India declare at 502/7, then spin twins Ravichandran Ashwin (2/9) and Ravindra Jadeja (1/21) toyed with the visiting batsmen before the bails were drawn on Day 2.

With Rohit and Mayank on a leather hunt for the majority part of the day on Thursday at ACA-VDCA Cricket Stadium, there was no respite for the fielders, and also the ball. Both the batsmen hit 23 fours six sixes each in a very strange coincidence. India did lose wickets in the heap, but the boundaries continue to come. And there was a moment in the play when the ball behaved as if it has got its own mind, trying to hide.

In the 129th over, South African spinner Keshav Maharaj produced a spitting delivery to beat both Ravindra Jadeja and wicketkeeper Quinton de Kock, and raced to the leg side boundary for four byes. And the ball was nowhere to be found. The two ensuing South African fielders even tried ransacking the 'covers' kept outside the ground but to little help. But Aiden Markram, who was fielding at midwicket, surreptitiously came down and picked the ball up from between the boundary padding, and left everyone in a fit of laughter.

And cricket fans had a field day. Here are some funny reactions:

The South Africans can't find where the ball went! Look at the big screen lads! ðÂÂÂÂÂÂÂÂÂ

Aiden Markram has great young eyes! The ball goes missing and he finds it ðÂÂÂÂÂÂÂÂÂ #INDvSA

Markram to the rescue!! Knows his balls #INDvsSA

They weren't looking for the ball, they were about to put the covers on and call an end to the day's play.

This is India's first home series as a part of the newly conceived ICC World Test Championship. Top-Raked India have started their Test World Cup campaign with a series win in the West Indies. Proteas are playing their first series of the championship.