IND Vs SA: Can Rohit Sharma Do A Virender Sehwag? Hitman Faces Trial By Fire As India Seek To Solve Opening Woes

Rohit Sharma, possibly the best opener in limited-overs cricket, has so far failed to hit the mark in Test cricket. But with the Indian camp trying him as an opener in the upcoming series against South Africa, the 32-year-old has been given a chance to revive his red-ball career 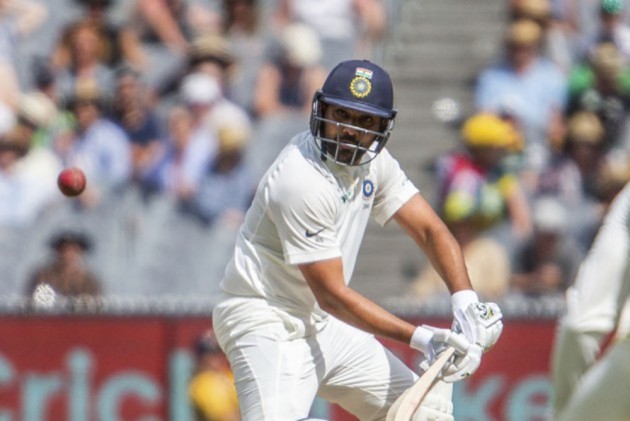 Rohit Sharma is the Hitman who has failed to hit the mark in Test cricket. In 27 Tests, the 32-year-old has scored 1585 runs at an average of 39.62, which is not bad, but these numbers don't justify his talent. Just see his numbers in the limited-overs' cricket. Now, he is set to open for India in the upcoming series against South Africa, and the very prospect of Rohit opening the innings in red-ball cricket reminds fans of Virender Sehwag. The flambouyance, the sheer audacity. (More Cricket News)

Rohit started his Test career with back-to-back centuries against the West Indies in 2013. Then a run poor outing and the abundance of talent in the Indian camp limited his chances. He has been in and out of the Test team while remaining the vice-captain in the white-ball format. Such is the irony!  But the absence of Prithvi Shaw has opened a window of opportunity for Rohit and the Indian camp is ready to give him the chance to showcase his brilliance in Test cricket, again.

Sehwag too started his career as a middle-order batsman, then became of the greatest ever openers, despite having obvious flaws. In contrast, Rohit has far better technique. But one thing which is common in their batting is fearlessness. Like Sehwag, Rohit can certainly take Test cricket by storm. Rohit was found wanting against the moving ball, which looked more of a psychological thing rather than his technique. And there is also the burden of expectation, which may sound like a lame excuse for one of the greatest batsmen of modern times. But the truth is, he has always been treated as a surplus to requirement when it comes to Test cricket.

Having warmed the benches at various stages of his Test career, Rohit has been assured a run of some five Test matches, that too in his favourite role -- as an opener. This is as good as a 32-year-old can get. There's no scope for failure this time, especially considering the fact that India will need to groom future players too.

Then, India are also facing opening woes. Without a stable opening pair, the top-ranked side will find it almost impossible to win the inaugural ICC World Test Championship. The change of heart in the Indian camp, to allow one of their stars to have a crack at reviving his Test career, augurs well. If Rohit turns up all guns firing, then Indian cricket will have a whale of a time.

It will not be an easy task for Rohit though, against a talented South African pace attack. With the likes of Kagiso Rabada, Vernon Philander, Lungi Ngidi and Anrich Nortje, and everyone looking at him, it will the proverbial trial by fire for the Hitman. And it starts on Thursday at Vizianagaram, in the warm-up match.