The craft and ferocity displayed by Mohammed Shami during his spell in the fourth innings of the Visakhapatnam Test against South Africa had raised the bar for pace bowling on docile sub-continental pitches and also forced Pakistan legend, Shoaib Akhtar to reveal his mentorial relationship with the Indian bowler 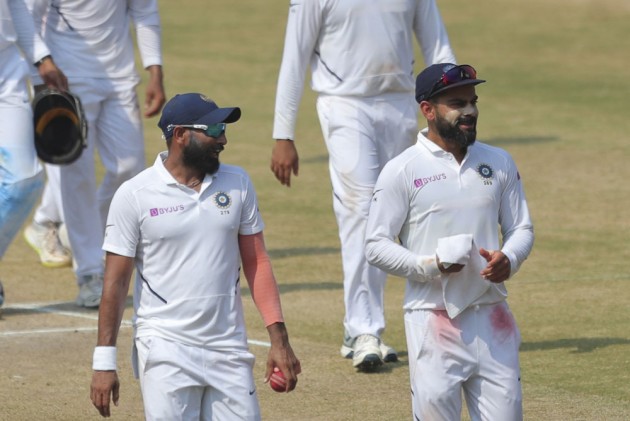 Legendary Pakistan fast bowler Shoaib Akhtar has hailed Mohammed Shami, who played a crucial role in India's emphatic win in the first Test against South Africa, as the "king of reverse swing" while also predicting that the 29-year-old will "thrive" under a "potent" captain like Virat Kohli.

Shami, who continues to play second fiddle to Jasprit Bumrah, didn't let the Indian camp feel the absence of the injured team-mate. He picked up a brilliant five-wicket haul in the fourth innings of the match at Visakhapatnam, which India won by 203 runs.

The craft and ferocity displayed by Shami during that spell of ten-odd overs made waves across the world, earning praise and raised the bar for pace bowling on docile sub-continental pitches. And Akhtar, who is undoubtedly one of the greatest fast bowlers, couldn't stop himself from revealing his mentorial relationship with the Indian bowler.

See: Remnants Of A Broken Stump!

Speaking in a video on his YouTube channel, Akhtar said that he once advised Shami to try and become a tearaway pacer while also using the reverse swing, a rare quality in contemporary fast bowlers from the sub-continent.

"After India's (50-over) World Cup disappointment, Shami called me up one day and said he was feeling sad that he could not do well for India. I told him not to lose heart but maintain fitness. I told him that the home series is coming and you will do well.

"I told Shami that I want him to become a tearaway pacer, running through batting line-ups. He has seam and swing, besides that he has reverse swing which very few bowlers in the subcontinent have. I told him you can become king of reverse swing.

"Now, you see what he has done, he has got wickets from a docile pitch. I am very happy for him.

After the match, Shami had credited skipper Kohli for giving Indian bowlers the freedom to do what they want, including the length of a spell.

"Virat Kohli as a captain always hears us out and gives us the freedom to follow our strategy during the match. He has given us the freedom to take a call on whether we want to bowl 5 overs or 7 overs or more -- he says ‘if you have the power, go ahead and bowl'."

Akhtar saw that trust between Shami and Kohli, and said that "Under Virat Kohli, Shami is going to thrive. I told Shami that Kohli is a potent captain who enjoys captaincy and gives full freedom to his bowlers."

The second Test match will be played in Pune, beginning Thursday.