IND Vs WI, 2nd ODI: Shreyas Iyer And Rishabh Pant Hit Most Runs In An Over For India - WATCH

In the must-win second ODI at Vizag, India amassed a mammoth 55 runs from just two overs to post a challenging 387/5 in 50 overs with Delhi Capitals duo Shreyas Iyer and Rishabh Pant giving the finishing touch 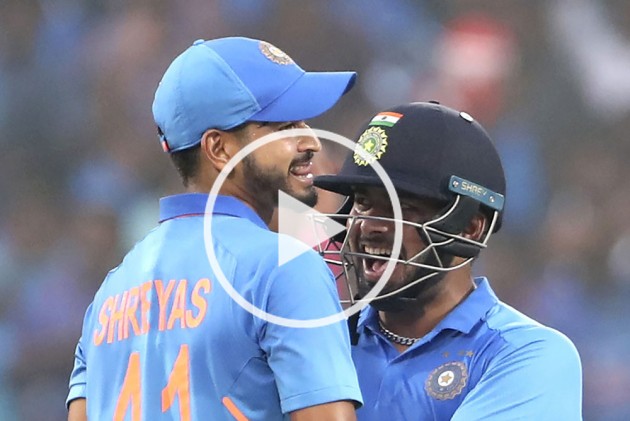 On the eve of Indian Premier League (IPL) 2020 player auction, Delhi Capitals duo Rishabh Pant and Shreyas Iyer exhibited their beast mode against the West Indies at Visakhapatnam, milked Roston Chase for India's most runs off an over in ODIs.

In the must-win second ODI at the VDCA Stadium, India amassed a mammoth 55 runs from just two overs as India went on to gather 79 runs in the last five overs to post a challenging 387/5 in 50 overs.

While Rishabh Pant hit a 16-ball 39, Iyer blasted 53 runs off 32 deliveries. Both Pant and Iyer's knocks were laced with three boundaries and four hits into the stands.

In the 47th over, they hit Chase for 31 runs, for most runs off an over in ODIs, beating 28 by Sachin Tendulkar and Ajay Jadeja against New Zealand at Hyderabad in 1999.

Earlier, openers Rohit Sharma (159) and K.L. Rahul (102) slammed respective centuries and laid a solid foundation for the hosts, sharing a 227-run partnership for the opening wicket.

With the ton, Rohit achieved another milestone as he joined former India skipper Sourav Ganguly and David Warner in the list of most ODI hundreds in a year.

In the ongoing contest of the three-match series, Rohit slammed his 28th ODI century, which was his seventh ton this year. Both Ganguly and Warner had seven centuries in the year 2000 and 2016 respectively. Former India great Sachin Tendulkar tops the chart for most tons in a year as he had smashed nine centuries in the year 1998.