Virat Kohli started the ICC Cricket World Cup 2019 group match against West Indies on 19, 963 runs to his name and was just 37 short of the record that legendary Indian batsman Sachin Tendulkar held along with West Indies great Brian Lara 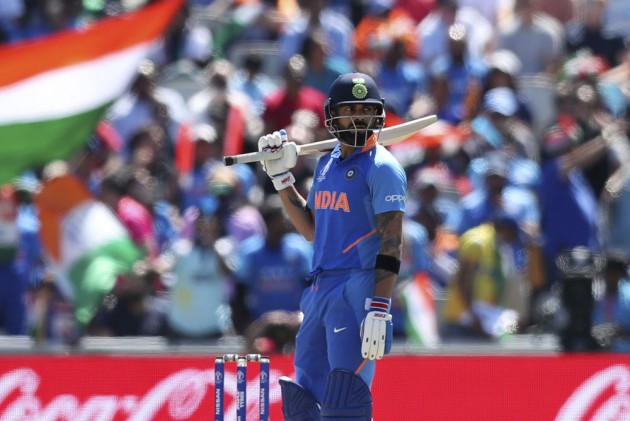 India skipper Virat Kohli added another feather to his cap as he became the fastest batsman to score 20,000 international runs when he reached 37 against the West Indies during their ICC World Cup 2019 group match at Old Trafford, Manchester on Thursday. He also registered 9,000 runs batting at the number three spot.

Kohli had started the game on 19, 963 runs to his name and was just 37 runs short of the record that legendary Indian batsman Sachin Tendulkar held along with West Indies great Brian Lara.

The India skipper reached the 20,000-international run milestone in 416 innings (131 in Tests, 223 in ODIs and 62 in T20Is). Tendulkar and Lara, both had reached the milestone in 453 innings, followed by former Australian skipper Ricky Ponting who scored 20,000 runs in 468 innings.

He became the 12th batsman to this landmark and the third Indian after Tendulkar (34,357 runs) and Rahul Dravid (24,208 runs). The 30-year-old run-machine has been in great form in the ongoing tournament. After getting out cheaply against South Africa in the World Cup opener, Kohli scored 82 runs against Australia, 77 against Pakistan and 67 against Afghanistan.

Interestingly, during the innings against Pakistan at Old Trafford on June 16, Kohli also became the fastest batsman to score 11,000 ODI runs.

Before the World Cup, Kohli was not at his usual best in the Indian Premier League. While he did score 328 runs in the 14 matches for the Royal Challengers Bangalore (RCB), it was not the kind of performance which one associates with India's 'run machine'.

However, in the World Cup, Kohli is looking a lot more comfortable, be it while facing the quicks or the spinners. If one does an analysis of his performance in the four innings he has played so far, ahead of the Windies knock, one will find that the batsman has concentrated on playing in the 'V' and has resisted from playing cross batted shots.

This approach can be seen as an attempt to tackle the swing on offer in English conditions to the pacers and also to adjust with the variable bounce which has been seen on many wickets on which India have played.