Chris Gayle failed to impress with his bat, but entertained his fans, team-mates and rivals with his on-field antics during India vs West Indies group match of the ICC Cricket World Cup 2019 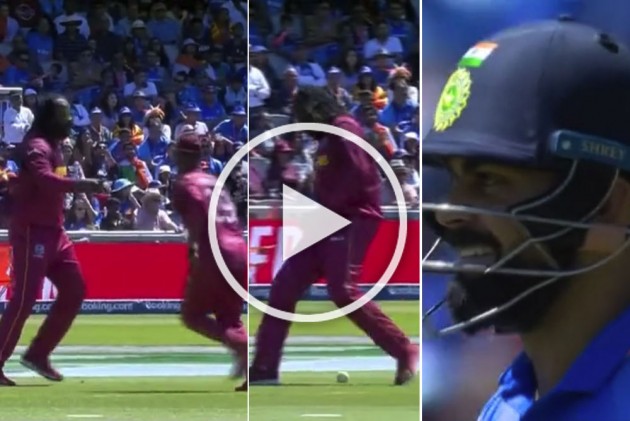 Where there is Chris Gayle, there is fun. The West Indies great, who is taking part in the ICC Cricket World Cup for the one last time, was at his idiosyncratic best when they took on India at Old Trafford, Manchester on Thursday.  Entertaining everyone – fans, colleagues and rivals.

In one instance, he did a dabbled with the ball as he is playing football, trying to nutmeg an opponent. Then, after a lazy pick-up at square leg, the 39-year-old played with an unsuspecting Nicholas Pooran, who was there to help him retrieve the ball even as MS Dhoni and Virat Kohli completed a non-existent single.

Gayle Set To Retire After Home Series Against India

Seeing the antics from one of the veterans of the game, a bemused India captain Kohli couldn’t hide his laughter, a hearty one in that too. Relive the moment here:

Earlier in the Indian innings, Gayle stopped a Virat Kohli shot at backward point with a 'valiant' dive to save the boundary. It prompted the packed Old Trafford-crowd to applause the effort, and Gayle's response was usual epic. A royal wave or some blessings! Find it out here:

Gayle, regarded as one of most destructive batsmen to have ever played the game, also has a colourful career with many off the field controversies threatening to undermine his legacy. Despite all the negatives, the Jamaican remains one of the most beloved figures in the sport.

He is most likely to play against India in the upcoming Test Championships fixture in the Caribbean.