Sanju Samson was included in the Indian squad as a replacement for the injured Shikhar Dhawan, but is yet to get a game in the series against the West Indies 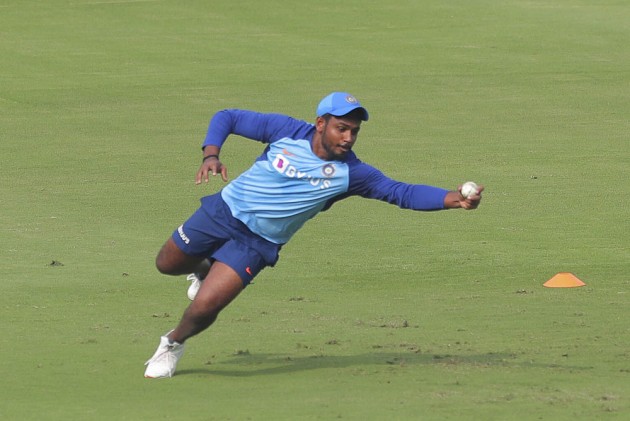 Congress lawmaker Shashi Tharoor on Tuesday said that the Indian cricket team missed an opportunity by not allowing wicket-keeper batsman Sanju Samson to play in front of his home crowd.

India lost to the West Indies in the second T20I of the three-match series on Sunday at Thiruvananthapuram.

"Most of us hoped the Indian team would have made the gesture of resting a player to allow @IamSanjuSamson to play in front of his home crowd. We would have inspired him to great feats of derring-do," Tharoor tweeted.

Most of us hoped the Indian team would have made the gesture of resting a player to allow @IamSanjuSamson to play in front of his home crowd. We would have inspired him to great feats of derring-do! https://t.co/GD674xul95

Samson had come out to a rousing reception and the crowd was seen ecstatic as he came out to train with the Indian lineup on Sunday. Coach Ravi Shastri was also seen in a jovial mood with Samson.

The 25-year-old Samson was included in the Indian lineup as a replacement for the injured Shikhar Dhawan.

The selectors had announced the Indian ODI and T20I squad for series against the Windies on November 21 and Samson was not a part of the original squad.

Samson's exclusion from the squad did not go down well with many supporters as they criticised the selectors for not giving him a chance.

Samson was a part of the T20I squad for the recently concluded series against Bangladesh, but he was not given a chance in the playing XI as Rishabh Pant was preferred over him.

Currently, the series between India and West Indies is levelled at 1-1. Both sides will next lock horns with each other on December 11 at Wankhede Stadium in Mumbai.