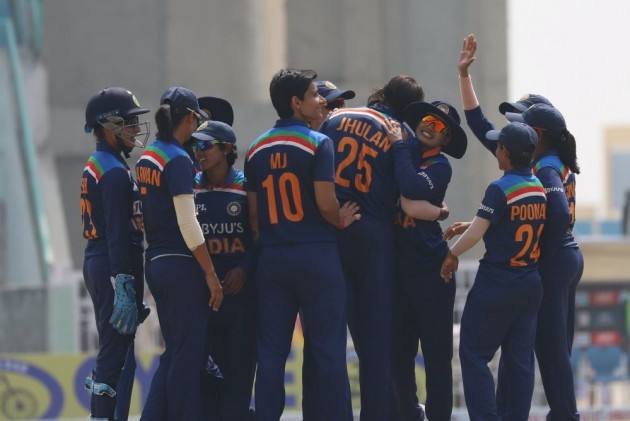 Their confidence high after a comprehensive series-levelling win, the Indian women's cricket team would look to gain the upper-hand when it takes on South Africa in the third ODI of the ongoing five-match series here on Friday. (More Cricket News)

And come Friday, the Mithali Raj-led side would look to carry on the momentum with yet another clinical display.

The Indian bowlers led the way in the second match after an ordinary outing in the opener to bowl out South Africa women for a below-par 157.

"It was pretty challenging because I was coming back after a year, and playing a competitive side like South Africa. I was just trying to hit the ball on the right areas," Goswami had said of her performance.

She was ably supported by left-arm spinner Rajeshwari Gayakwad (3/37) and Mansi Joshi (2/23) as India bowled out South Africa in 41 overs.

Then Smriti Mandhana (80 off 64 balls) and Punam Raut (62 off 89) shared an unbeaten 138-run partnership for the second wicket as Indian women comfortably chased down the target in 28.4 overs.
The rustiness that was apparent in the series-opener was shaken off in the second outing by the hosts, who seem to have got back their rhythm given the near-perfect performance to outwit the visitors.

Goswami's form will be crucial to India's chances.

For South Africa, batting efforts skipper Sane Luus (36) and Lara Goodall (49) were a positive. Their 60-run third wicket stand saved the visiting scorecard from being a complete disaster.

However, the Indian troika of Jemimah Rodrigues, Mandhana and Raut would be a tough challenge for the the touring bowlers.

Mandhana was at her attacking best as she hit 10 boundaries and three sixes during her whirlwind knock, while Raut struck eight fours.

But the Indians can't afford to take South Africa women lightly as they are expected to bounce back hard after the demoralising defeat.  Match starts at 9 am.