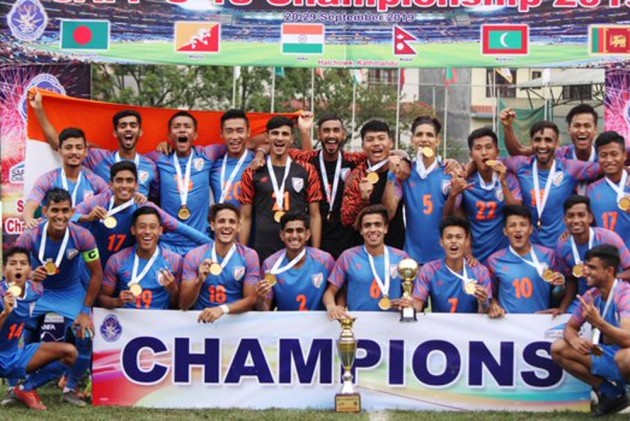 India's age-group football teams continue to create ripples in the regional tournaments with the U18 winning the SAFF Championship for the first time on Sunday. The Indian colts defeating Bangladesh 2-1 in the final at Kathmandu, Nepal. (More Football News)

The U-15 team already lifted the SAFF trophy, beating Bangladesh in the final, in August 2019. While the U-16 team went on to qualify for the continental tournament, the U-19 team will play the AFC Qualifiers in November in their quest.

India surged ahead as early as the 2nd minute when Vikram Partap Singh sped past his marker and banged it in. The match-winner came in injury time when the nippy Ravi Bahadur Rana scored off a screamer from about 30 yards.

Yeasin Arafat reduced the margin for Bangladesh in the 40th minute.

"I had maintained that it will take a moment of brilliance to end this SAFF Championship, and it was fitting that Ravi finished it off with a wonderful strike," head coach Floyd Pinto stated moments after the final whistle.

"We were not just the best footballing team in the tournament, but also the most effective team. I am really happy for the boys. They earned it," he added.

"The sacrifices, and the commitment of the boys was exemplary.

India's Ninthoinganba Meetei was adjudged the Most Valuable Player of the tournament.

"The team improved with every match. It's double delight for Indian youth teams especially after the U-16 qualified to AFC Championships last week. Keep it up," Patel said.

General secretary Kushal Das said: "The SAFF U-18 Championship had been eluding us. Congratulations to everyone. This triumph will add confidence prior to the AFC U-19 Qualifiers in November which is the ultimate test."

The victory makes it sweeter with the U-15 national team having lifted the SAFF U-15 Championship beating Bangladesh in the final in August 2019.

"This is going to give us a huge boost for the AFC Championship and make us more confident as we prepare for it. Hopefully, we will be able to kick-off AFC Qualifiers in a good manner," Floyd said.

"I am very thankful to AIFF and SAI for their help in the exposure tours all throughout, and look forward to their support."

Meanwhile, both teams were reduced to 10-men each in the 22nd minute when Gurkirat Singh and Md Fahim were given marching orders following a tiff. Bangladesh were further reduced to nine men in the 40th minute when their skipper Yeasin was booked for a second yellow card for "illegitimate celebration" following the equaliser.