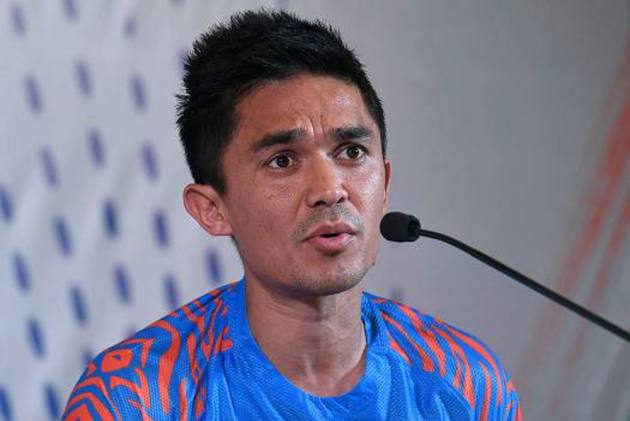 Indian football team captain and star striker Sunil Chhetri on Thursday said he has tested positive for COVID-19, a development that is set to rule him out of the international friendly against Oman on March 25 in Dubai. (More Football News)

He is also likely to miss the March 29 friendly against the United Arab Emirates at the same venue. The Bengaluru FC star forward took to social media to post the update and said that he is feeling fine.

"In a not-so-happy update, I've tested positive for COVID-19. In better news, I feel fine as I continue my recovery from the virus and should be back on a football pitch soon," Chhetri wrote on his Twitter handle.

In a not-so-happy update, I've tested positive for COVID-19. In better news, I feel fine as I continue my recovery from the virus and should be back on a football pitch soon. No better time to keep reminding everyone to continue taking all the safety precautions always.

"No better time to keep reminding everyone to continue taking all the safety precautions always."

The 36-year-old was competing in the Indian Super League (ISL) till last month in Goa in a bio-secure bubble.

His campaign got over after Bengaluru FC failed to make the semifinals.

The team's last game was on February 25, which Chhetri played and also scored a goal. Bengaluru FC were placed seventh on the table at the end of the league stage.

Chhetri, the second-highest goal scorer in international football among active players, scored eight times in the 20 ISL games this season.

As part of the preparation for the two matches against Oman and UAE, the national team is scheduled to assemble for a preparatory camp in Dubai from March 15.

India last played an international match in November 2019, in the 2022 FIFA World Cup qualifiers against Afghanistan (in Tajikistan) and Oman (in Muscat).

Already out of contention for the second round of World Cup qualifiers, India are scheduled to play two home matches against Asian Champions Qatar and Afghanistan, and an away game against Bangladesh.