In a pulsating bronze play-off, India edged past Germany 5-4 to earn a podium finish at the Games after 41 years 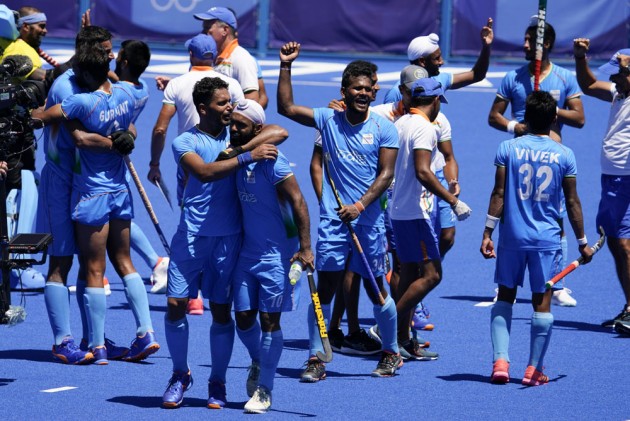 Prime Minister Narendra Modi on Thursday led the nation in hailing and celebrating Indian men's hockey team's historic bronze medal-winning feat at the Olympic Games, saying the day will be etched in the memory of every Indian.

In a pulsating bronze play-off, India edged past Germany 5-4 to earn a podium finish at the Games after 41 years.

"Historic! A day that will be etched in the memory of every Indian. Congratulations to our Men's Hockey Team for bringing home the Bronze," tweeted Modi.

READ: Naveen Patnaik, The School Goalkeeper Defending Indian Hockey Like No One Else

"With this feat, they have captured the imagination of the entire nation, especially our youth. India is proud of our Hockey team."

"An emotional moment for the entire nation, a moment of pride. The long wait has ended! Congratulations to the Indian Men's Hockey team for their splendid achievement," tweeted Bindra.

Iconic cricketer Sachin Tendulkar also hailed the hockey team and praised the efforts of goal-keeper PR Sreejesh for saving a penalty corner in the dying moments of the game.

"Congratulations to each & every member of the hockey contingent on winning the #Bronze (medal) for India! A fantastic hard fought win. The penalty corner save by Sreejesh in the dying moments of the game was amazing. Entire (India) is immensely proud! ," tweeted Tendulkar.

Ace tennis player Mahesh Bhupathi was impressed with the approach of the Indian players.

"Lion Hearts!!! Can't say enough about the attitude, first coming back and then holding on. Congrats @TheHockeyIndia on making history. Truly emotional moment for the country. @allthatglittersisnotgold#Olympis,” tweeted Bhupathi.

Sports Minister Anurag Thakur too congratulated the ‘Men in Blue’ for their performance.

"A BILLION CHEERS for INDIA! Boys, you’ve done it! We can’t keep calm! #TeamIndia! Our Men’s Hockey Team dominated and defined their destiny in the Olympics history books today, yet again! We are extremely proud of you! #Tokyo 2020," tweeted Thakur.

Odisha Chief Minister Naveen Patnaik, whose government has supported both the hockey teams, congratulated the team.

"Brilliant in Blue. Congratulations Indian Men’s #Hockey Team on the spectacular victory to give us an Olympic medal after 41 long years. This historic win at #Tokyo 2020 will inspire generation of sportspersons. All the very best for the future. #Cheer4India @thehockeyindia," tweeted Patnaik.

"Terrific achievement and one for the history books! What a wonderful team! Congratulation’s boys," tweeted Iyer.

Kaur tweeted, "41 years was a long wait. Well done boys @manpreetpawar07 and Team. You've been stunning on the field. We are all so proud of you. Jai Hind."

Former India pacer RP Singh said the bronze medal was no less than a gold.

"Bronze looks like gold as it has come after 41 long years. Proud of our boys!," tweeted RP.